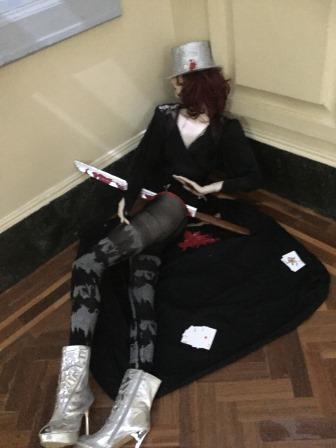 All SheKilda3 convention-goers had the opportunity to exercise their creativity by writing the best opening paragraph for a murder mystery story inspired by the ‘body’ and clues in the St Kilda Town Hall Foyer.

Prizes were to die for – a bag of crime books donated by Sisters in Crime plus a tea towel and fan donated by Pantera Press – and there were no limits to the number of entries.

The winner was Christa Ludlow (North Sydney, NSW) who won 3rd Prize in the 2001 Scarlet Stiletto Awards: This was her winning entry:

Detective Inspector Scarlet Heales rolled her eyes at the constable’s attempt at a joke.

“Seriously boss, a body in the St Kilda Town Hall, which just happens to be full of people attending SheKilda3. It can’t be An Isolated Incident.”

“So who’s the victim.

“What Came Before the body was found?”

“The Opposite of Life, that is, death. But before that, she didn’t mingle, apparently. A Dark Horse.”

Scarlet sighed. She saw Stormclouds ahead. Give the Devil His Due – this could be the perfect murder.”

Christa didn’t have room for the books in her luggage and kindly donated them back.

Runner-up was Natalie Conyer (Mosman NSW) who was shortlisted in the 2016 Scarlet Stiletto Awards and last year won the Sun Bookshop 3rd Prize for “New Start” which also took out the inaugural Harper Collins Romantic Suspense Award. This was her entry:

Tuesday night’s Council meeting had not gone to plan.

Many thanks to the judges – Sulari Gentill, Wendy James and Lucy Sussex – and to Kylie Fox who dressed Manny Quinn and staged her ‘murder’.