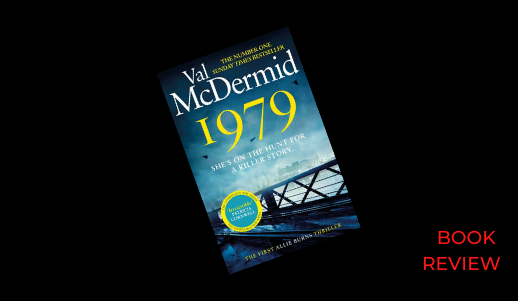 Somewhere someone must be compiling a list of all the former journalists who have turned to crime – fiction, that is. Think Michael Connelly in the US or closer to home the late Peter Temple, Jane Harper, Chris Hammer, Michael Robotham and Tim Ayliffe. It can’t be just a coincidence.

Paula Hawkins, whose first book, The Girl on the Train, was something of a publishing phenomenon in 2015, was also a financial journalist for 15 years before her breakthrough success. Val McDermid, meanwhile, spent 16 years as a journalist before publishing her first crime novel, Report for Murder in 1989, the protagonist of which was Lindsay Gordon, a self-described “cynical lesbian socialist feminist”.

Val McDermid returns to her roots as a journalist in her latest novel, 1979.

McDermid’s latest, 1979, therefore marks something of a return for an author who has since written (by my reckoning) 29 crime novels across four series as well as five stand-alone thrillers and umpteen short stories. Featuring a young journalist, Allie Burns, working for the Daily Clarion in Glasgow, 1979 is touted as the first in a new series that draws on McDermid’s own reported experience of racism, homophobia, sectarianism and misogyny that characterised the workplace back in the day. McDermid does not hold back.

Not surprisingly, Allie’s pretty frustrated with her lot. She’s from Kirkcaldy, she’s been to Cambridge and served an apprenticeship on a newspaper in the north-east of England. Nonetheless, she seems forever condemned to the “women’s stories” that need the “women’s touch”, rather than the hard news stories she craves.

So, when her colleague Danny Sullivan asks for help in putting together a big story that will lift the lid on financial corruption in the top end of town, she is only too eager to help out.

1979 unfolds in three acts: the first involves Allie and Danny working together on his story; for the second they team up on a story of Allie’s that involves Scottish independence and a potential terrorist threat, while the third joins the dots in the clever ways that McDermid’s readers have come to expect of a consummate plotter.

Along the way there are the delights of McDermid’s liberal use of the Scots dialect as championed by the great Robert Burns himself. Danny’s brother Joseph is “sleekit”, nicely glossed as “smooth, sly and as non-stick as a Teflon frying pan”. As always, McDermid is also attentive to what her characters get to eat, Allie’s speciality being stovies, a recipe McDermid herself has championed in her hilarious online cooking classes aptly entitled “Cooking the Books”.

With its retrospective feminist rage, its Glaswegian setting and a relatable central character, 1979 has all the ingredients for yet another successful McDermid series.

There’s a nice moment in A Slow Fire Burning when one of the characters ponders the possibility of writing a crime novel entitled The Boy on The Boat. This could well have been the title of Hawkins’ latest book since the crime that precipitates events is the murder of a young man on a narrow boat moored on the Regent’s Canal in London. There’s a topographical map to help the reader work out the logistics of the scene.

The body is discovered by Miriam, who lives on a neighbouring boat and is acutely aware of how she is perceived as “a fat old spinster, tree-hugger, knit your own yoghurt curtain twitcher”.

But Miriam, like all the characters in this multi-layered book, is so much more. For a start, there’s Laura, the self-harming damaged young woman who works in the local laundrette and who was with the victim the night he died. And then there’s Irene, the elderly lady who Laura helps (and steals from) who effectively functions as the moral compass of a story that sets off in many different directions at once to end with an answer – but also many more questions.

Hawkins has spoken in the past about the authors and the books that have inspired her. They include Donna Tartt’s The Secret History, and the novels of Kate Atkinson with their “exceptionally crafted characters”.

A Slow Fire Burning reveals just how much Hawkins has learned from her mentors. It’s complicated, beautifully observed and extremely unsettling.