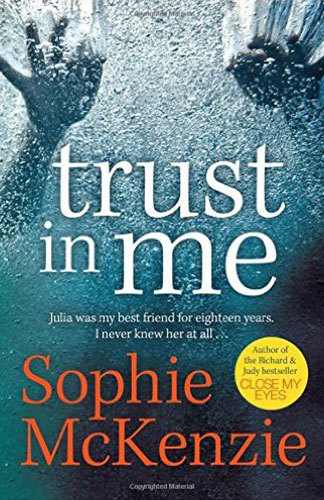 Author: Sophie McKenzie
Publisher: Simon & Schuster (Copyright © Rosefire)
Copyright Year: 2014
Review By: Lesley Vick
Book Synopsis:
Julia has always been the friend that Livy turns to when life is difficult. United fifteen years ago by grief at the brutal murder of Livys sister, Kara, they’ve always told each other everything, So when Julia is found dead in her home, Livy cannot come to terms with the news that she chose to end her own life. The Julia that Livy knew was vibrant and vivacious, a far cry from the selfish neurotic that her family seem determined to paint her as Troubled by doubt but alone in her suspicions, Livy sets out to prove that Julia was in fact murdered. But little does she realise that digging into her best friend’s private life will cause her to question everything she thought she knew about Julia. And the truth that Livy discovers will tear the very fabric of her own life apart.

As the title suggests the theme of this book concerns trust. Who can you trust and how well do you really know the people you already trust? To what extent do we all hear what we want to hear and see what we want to see? The main character, Livy, became best friends with Julia when Livy’s sister Kara was murdered many years before. Julia had been Kara’s friend and the tragedy, still unsolved, made Livy and Julia very close. Although their lives have evolved quite differently, the closeness of their friendship remains. Livy is married to Will and has two children – a rather stroppy daughter and a more amenable son. Livy’s marriage is under stress since she discovered Will had had an affair a few years before. The affair is over but it continues to haunt the marriage and Livy’s trust in her husband. In complete contrast, Julia has never married and lives a carefree and exciting life, including various lovers and boyfriends. Most importantly, Livy has always trusted Julia and believes that Julia confided everything to her. Then another tragedy strikes.

Arriving for a regular lunch date with Julia, Livy and her children find Julia dead, an apparent suicide. The authorities accept the suicide explanation but Livy does not. She does not believe that her strong, bright and confident friend would suicide and, in the face of opposition from nearly everyone else, Livy sets out to investigate Julia’s death. Livy then encounters more damage to her sense of trust. It seems that Julia had kept things from her, some of them very significant, and including the news of her latest lover, DB, who also thinks Julia was murdered.

Julia’s family on the other hand describe her as selfish, depressed and drinking too much. Livy’s confusion grows as she continues her quest for the truth. Will is concerned about the impact of the situation on the two children and becomes increasingly angry with Livy’s search. She goes off with DB in search of clues, even though she knows scarcely anything about him or his relationship with Julia. Julia’s real character is puzzling given the positive perspective Livy has of her, the apparent affection DB felt for her and the various negative opinions of her mother, her rather weird brother and her sister-in-law.

Throughout the story we are given chilling insights into the thoughts of the killer and it is clear that Kara’s death and others are also related to the current murder. Although I had worked out the identity of the killer before the end of the book the investigation and the suspense were done well, as was the exploration of the theme of trust. My only reservation was the character of Livy herself. She is rather lacking in personality, a bit obsessive and self-pitying. Fortunately the thriller element is better than the characterisation.