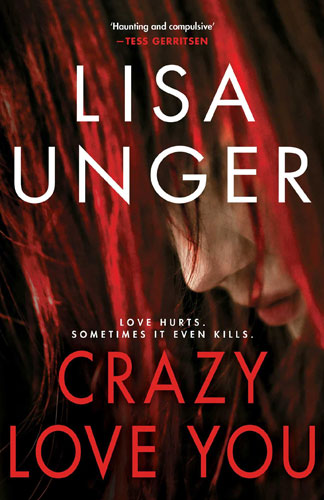 Author: Lisa Unger
Publisher: Simon &Schuster
Copyright Year: 2015
Review By: Lesley Vick and Anne Elizabeth Bruist
Book Synopsis:
Love hurts. Sometimes it even kills… Darkness has a way of creeping up when Ian is with Priss. Even when they were kids, playing in the woods of their small Upstate New York town, he could feel it. Still, Priss was his best friend, his salvation from the bullies who called him “loser” and “fatboy”… and from his family’s deadly secrets.
Now that they’ve both escaped to New York City, Ian no longer inhabits the tortured shell of his childhood. He is a talented and successful graphic novelist, and Priss… Priss is still trouble. The booze, the drugs, the sex—Ian is growing tired of late nights together trying to keep the past at bay. Especially now that he’s met sweet, beautiful Megan, whose love makes him want to change for the better. But Priss doesn’t like change. Change makes her angry. And when Priss is angry, terrible things begin to happen.

Lisa Unger’s skill as a writer of psychological thrillers is well displayed in this complex and often shocking story. The unreliable narrator, Ian, suffered considerable trauma in his childhood and the only friend he had when he was a fat, bullied kid was Priss. She defended him and protected him from both mentally unstable – indeed homicidal – members of his own family and mocking outsiders. She is still his friend now he is a slimmed-down, successful adult, ensconced in a fashionable New York loft apartment and earning good money as a graphic novelist.

A character based on Priss is a significant figure in his novels, someone who protects the character Fatboy. Priss seems to be an idealised woman – strong, beautiful, sexy and perhaps a bit dangerous. But the presence of Priss, who may or may not be real, has its dark side. In the relationship between Ian and Priss romantic infatuation and totally loyal friendship seem to merge. Ian is drug addicted and sexually obsessed with Priss but then he meets Megan who could not be more different from Priss. Ian falls in love with Megan. He wants to change his life and pursue happiness with her. Chilling and violent events ensue and it seems that Priss may be responsible. She is clearly enraged about another woman in Ian’s life and other changes consequent upon this.

Throughout the story we get revealing glimpses into the events in Ian’s childhood that so damaged him but each revelation raises more questions and fears. Readers are not only swept up in the story and the emotional suspense but remain unsure until the end about the truth of what we are being told. There are hints of the paranormal. We want Ian to succeed in his quest for happiness but as each horrifying episode occurs the chances of his success seem to recede irretrievably. Readers familiar with Lisa Unger’s previous books will be aware of her talents and new readers will be hooked. This compelling story is underpinned by research into the often terrible and longstanding effects of childhood trauma and addiction and this in turn enhances the convincing portraits of the characters.

Harlan Coben is quoted on the front cover as saying “if you haven’t experienced Lisa Unger, what are you waiting for?” as well as numerous other quotes from well known authors. I had—at least four other Unger’s, if not all eight (just didn’t write reviews back then…).

The back cover suggest we are in for an addiction story with the femme fatale keeping our hero hooked. Written in first person, from the point of view of Ian, also known as his comic hero(he writes them), Fatboy, we follow his current life, with interwoven chapters about his background. Ian meets Megan and falls in love. But Priss, who he has also fictionalised as a comic character, won’t let him go. Whenever it looks like he might live happily ever after, Priss intervenes and there’s a fire—or worse.

Set in New York City and Up State New York, this story grabs you from page one. Unger is a talented story teller, and though I got the twist/premise by page 50, it is clear certainly by half way through that she expects you to. She plays around with that little, straying too far for my liking into the paranormal realm, but ‘knowing’ and even knowing what the alternative might be, and what Fatboy believed, didn’t stop me from wanting to keep reading.

In many ways this is a story about loss in childhood of a sibling (both Megan and Ian have lost a brother/sister), and in Ian’s case, when a family’s own grief and mental illness had compounded the impact rather than buffered it.

Both in current time and as we unravel Ian’s past, there is plenty of action to keep us on the edge of our seats—so tighten your seat belt and enjoy the ride!