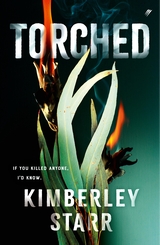 An explosive, haunting and utterly compelling crime novel about mothers and sons and the ties that bind them.

A small Yarra Valley town has been devastated by a bushfire, and Reefton Primary School Principal Phoebe Wharton can’t sleep. She’s the single mother of Caleb who is accused of starting the fire – on purpose. Twelve people are dead, students from her school among them; only a monster would cause such carnage. But where was her son that day? No one knows but Caleb, and he’s not talking.

Against mounting community rage, Phoebe sets out to clear her son. But every avenue leads back to Caleb. Why did he vanish from his Country Fire Authority shift? Who else was at the abandoned goldmine that day? Why is Caleb refusing to speak?

Phoebe will be forced to confront the nature of guilt and redemption, and decide what boundaries she is willing to cross to save the son she loves.

This moving, brilliantly-written and crafted, novel portrays one of the best descriptions of a bush firestorm I’ve read. Torched raised ethical and moral questions which haunted me long after I laid the book aside. The novel portriays the lengths to which a mother will go to prove her difficult and disturbed, eighteen-year old son Caleb is not a firebug responsible for the deaths of fourteen people. Set in Brunton, a small town in regional Victoria, reminiscent of Black Saturday.

Caleb’s divorced lawyer parents, closely follow the allegations against Caleb. Their discussions underline differences between legal ‘facts’ and moral truths. Phoebe’s belief in her son and her tender recollections of his babyhood are moving. The bond between the two is tender in the face of Caleb’s intransigence and refusal to cooperate with her in his own defence.

When Caleb accidentally runs over and cripples his young next door neighbour, the citizens of Brunton turn away from the once-promising Caleb after his acquittal. The circumstances leading up to the accident and Caleb’s teenage vulnerability are slowly revealed throughout the book and the blame placed rather surprisingly elsewhere.

Caleb doesn’t forgive himself for the accident but rather works on a pictorial story about the crippled neighbour depicted as a wonder boy who can do anything. When it’s revealed Caleb was at the scene when fire started, Caleb will only state he left his post at the CFA to retrieve his irreplaceable sketchbook.

Throughout Torched Caleb is isolated, guilt-ridden, and lost. But a close bond develops between Caleb and his mother’s new partner Jack who introduces Caleb into the CFA.  Membership in the fire-fighting unit points to Caleb’s guilt, a stereotypical firebug: an unsettled young man obsessed with fire, or proving himself a hero by putting out a fire.

But if Caleb didn’t start the fire then is protecting someone? And who? The voices of Caleb’s mother Phoebe, his father, his grandmother, and Caleb chime in with observations of that dreadful day. To go farther would spoil not only the plot but also the delicate balance of mother–son love, guilt, and betrayal that form the core themes of this impressive novel. Questions arise about culpability in simple mistakes and human frailties, and how self-interest may lie in altruistic action causing people to betray those they love. At the conclusion of Torched, after the hidden actions and motives were revealed, I wanted, or needed to, evaluate the whole narrative anew.

Torched is a magnificent novel and a fabulous achievement by Kimberley Starr. I don’t want to give away too much regarding the subtle and complex interplay between the characters, their motives, and the pressures brought to bear on them. Torched should on everyone’s must-read list. Your moral sensibilities will be heightened as by fire, with the fragments of poetry, and the compelling images left by Starr’s writing.