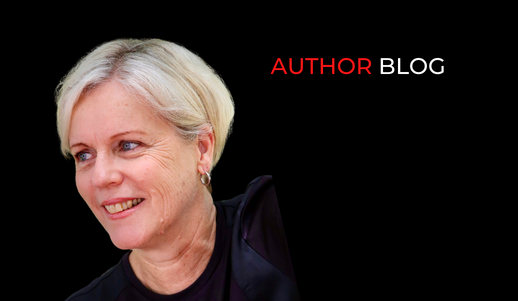 I have never considered myself a crime writer, but in each of my novels, crimes occur. I don’t face the actual crime head-on in these stories, nor is justice ever served for their victims.

My focus is directed more toward the consequences of crime on survivors (both the victim and their families); how exposure to violence and trauma can leave a dark tattoo on the soul of those caught up in the ripples of these events. And how these ripples can extend across subsequent generations, affecting lives well into the future.

Take, for example, the location of a crime. I have always been interested in the intersection between humanity and geography.

I am especially interested in how the locations of traumatic events influence the way people memorialise, move across, or live upon or near the ground that was the site of that trauma.

Here are some of the questions I ask myself in relation to this: What does it make a person’s grief look and feel like to be near that ground? Do they find comfort in visiting the site or does it cause them further harm? Do they commune with the earth or their lost loved one while there? How do they symbolise their grief, loss, or trauma at the site?

The over-arching question is probably best distilled to this: How do people make peace with trauma ground and all that happened there?

There are few literary works that closely explore the connection of how trauma is held in the body and how it is also held in the earth and what that might look like for people. It is something I particularly wanted to explore in my latest novel Bone Memories.

But, as I was writing this novel, a parallel trauma and grief was manifesting on a personal level. Because as I explored the human connections of my characters to the site of their trauma and loss – the site of a long-ago murder that continued to resonate in damaging ways throughout their family – I started exploring more fully my own trauma and grief at sites being lost in the natural world.

Glenn A. Albrecht says in his book Earth Emotions: New Words for a New World, that we have entered the ‘age of solastalgia’, which he defines as the pain and distress humans feel at the loss of the places they love. In his book, Albrecht gives voice, and words, to what he calls ‘Earth murder’, or ‘tierracide’ and the consequences this is having on people.

Too often, humans are the only actors in a novel, with ground, landscapes, Earth – all of it – merely a theatre upon which human activity is performed. This humancentric focus of fiction is something I wanted to redress in Bone Memories.

As I wrote the story, the trauma ground the novel is concerned with became a metaphor for sites of ecological trauma. And through Albrecht’s language and the language of the novel, I began to make sense of the darkening tattoo on my own soul as environmental catastrophes become increasingly prevalent around the world.

Having words for these feelings doesn’t take away the pain of them but knowing authors like Albrecht are recognising and naming these collective feelings of grief, reminds me that I live on a shared stage and if we all become actors of influence then we can help bring about the necessary change.

Because the drama unravelling before us – the greatest crime of all facing humanity – isn’t a fiction. And if we don’t influence change, then we too will be forced to reconcile that over-arching question: how do we make peace with all that we have done to Earth?