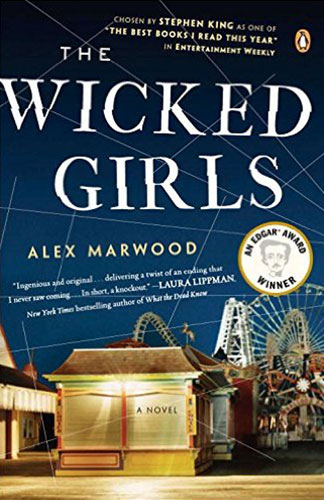 Author: Alex Marwood
Publisher: Sphere
Copyright Year: 2012
ISBN: 978-1-84744-520-9
Review By: Gayl O’Connor
Book Synopsis:
Twenty-five years ago two little girls were imprisoned for murder. Now journalist Kirsty Lindsay is reporting on a series of sickening attacks on young women and her investigation leads her to cleaner Amber Gordon. For Kirsty and Amber, it is the first time they have seen each other since that dark day when they were children. Aware of the danger they are in and with new identities – and families – to protect, they will do anything it takes to keep their wicked secret hidden.

Alex Marwood is the pseudonym of a British journalist. The Wicked Girls is her first novel. Two eleven-year old girls, Bel and Jade, are both at loose ends on a summer’s day in Oxfordshire, when they meet for the first time on a village bench outside the sweets shop where Jade has been refused service. By virtue of the fact that Chloe Francis’ elder sister wants time alone with Jade’s teenage brother; the two girls become unwilling babysitters of four-year old Chloe. The circumstances of Chloe’s ensuing murder are revealed in flashbacks, with a suspenseful impending air of hopelessness and doom. However, when the final inevitable act comes, it is still wrenching and Chloe’s death comes as a shock. Bel and Jade are incarcerated for Chloe’s murder.
It is twenty-five years later when the two women meet again by chance at the Funnland amusement park in the seaside town of Whitmouth, Kent. The town is painted as tawdry and has definitely seen better days. The town is inhabited by a mix of unsettling young holiday makers – often visiting for out-of-control stag and hens’ nights in clubs – and the residents, many of which appear to be strugglers. In the early chapters we are introduced to Amber’s co-workers at Funnland – the night shift cleaners – and to the creepy Martin, described later by Kirsty as ‘ a man in an anorak – he’s got the look of a stoat or a ferret… all pointy teeth and beady little eyes’, who is watching the nightlife of Whitmouth from his window.
Ironically, it is another murder that brings Amber and Kirsty face-to-face when Kirsty is sent to report on a body found in the mirror maze at Funnland. It is Amber who recognizes Kirsty, and implores her to go …. ‘and to go, now’. Kirsty doesn’t leave however, as more murders are committed in Whitmouth and she is assigned to cover them for the newspaper.
The reader must work out for themselves which woman is Bel and which is Jade, as glimpses of their lives over the intervening years are revealed. There are many key characters in the novel and these are brought vividly to life. Many of the characters are not particularly likeable, and their actions are often violent and at times are described in somewhat confronting detail, perhaps reflecting the reality of a world in which the author, as a journalist, has found herself reporting on in the past. In fact, Alex Marwood also provides many insights into life as a working journalist, not all of which are portrayed in a positive light. The end of the book is highly suspenseful, with clever and chilling use of the wax works on the Whitmouth pier.
Alex Marwood is working on her next novel. Based on the engaging and hair-raising experience of reading The Wicked Girls, the release of her next book will be eagerly awaited by many.