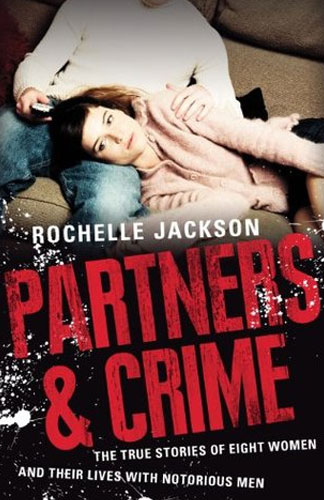 Confiding in investigative journalist Rochelle Jackson, these women finally get the chance to tell their own stories. Surprising, intimate and at times confronting, Partners and Crime takes us behind the headlines and media hype to reveal what it is really like to live with men who are outside the law.

Review by Karen Chisholm
“What was it like for Mary-Ann Hodge to be married to Mark ‘Chopper’
Read? How was Joe Korp’s former girlfriend Tania Herman persuaded to try to kill his wife Maria? And why did hairdresser Sylvia Bruno fall for Melbourne gangland killer Nikolai ‘The Bulgarian’ Radev?”

Why on earth was I reading a book on this subject matter? There was a not inconsiderable part of me that was wondering if I was rapidly tipping right over into some sort of voyeur. Although, the chapter about Tania Herman seemed to be going to answer something that never really came out at the time of the dreadful killing of Maria Korp – that idea of … why / how / what the?

Given my discomfort I’m perfectly prepared to admit that I started reading this book fully expecting a whole heap of attempted reputation restoration. Excuses, reasons and justifications. Some hefty doses of what I’d call “the Judy Moran defence” – I didn’t know / not in front of me / never suspected… All the stuff that’s next to impossible to swallow no matter how hard you chew. Whilst there are some alternative viewpoints of some of the men that these women hooked up with, apart from a few exceptions, there was acknowledgement of how they earned their money and the sorts of lives they lived. In Herman’s case there was an honesty about what she did, that made why she did it, if not understandable, at least believable. There was even, in other chapters, refreshing honesty about the daftness of thinking that you can change any man, let alone an institutionalised career criminal with a long history of violence.

What Jackson, as the author of these women’s stories has done, is avoid some obvious pitfalls. There’s not a lot of excusing going on, although there is some explanation of how somebody might dig themselves into a hole this deep. Whilst some of the women are attempting to explain the inexplicable, the delivery gives you an opportunity to hear their side, look at the relationship from their viewpoint, and make up your own mind about the motives and outcomes for each of these women.
At the end of the book I still had a sneaking suspicion that I’d stuck my nose way too far into the personal aspects of people’s lives. But then again, none of these women were forced into telling their stories, and perhaps understanding how it is that you can get yourself into these situations might help others from going there, or getting themselves back out again in one piece if it’s already too late.
Review by Vikki Petraitis
Most surprising about reading about the wives of crime is that the reader, along with author Jackson, begins with pre-conceived notions as well. A common factor with many of these women is that they met their criminal partners when they were very young, and the qualities that propelled the men into a life of crime – arrogance, self-confidence, power, charm – were the very qualities that these young women fell for.
Some of the book’s subjects were trying to escape from strict families, and who better to take them away than a crooked charmer. Jackson is very good at gently weaving her own observations throughout the narrative, and she mirrors the public’s curiosity. At the end of the book, the reader almost breathes a sigh for these women – some of whom refuse to see the bad side to their partners. Most notably Chopper Read’s wife Mary-Ann, who barely escaped the marriage with her life, provides a chilling glimpse at the two sides of the man she married. Jackson is to be commended for tackling this mostly-unheard of side of the story – the women left behind.
A fascinating read.