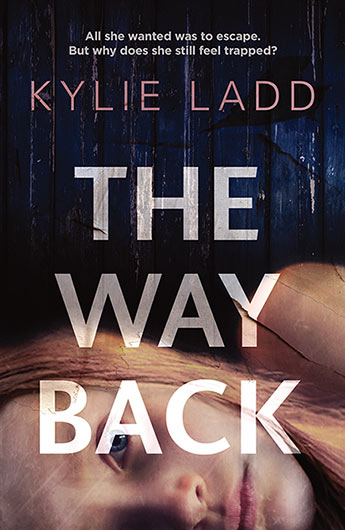 Charlie Johnson is 13 and in her first year of high school. She loves her family, netball and Liam, the cute guy who sits next to her in Science-but most of all she loves horses and horse-riding. Charlie’s parents have leased her a horse, Tic Tac, from the local pony club, but one day they go out for a ride in the national park and only Tic Tac returns…

Four months later, long after the police and the SES have called off the search, Charlie is found wandering injured and filthy miles from where she was last seen. Her family rejoice in her return, but can anyone truly recover from what Charlie’s been through? When a life has been shattered, how do you put the pieces back together?

Two words: great book.This is a fast read, definitely because you want to know what’s happening around the corner but also because of the device Ladd uses, with scene breaks taking us from the perspective of one character to another. In the hands of the wrong author this could be confusing. Not here. Ladd does something I find rare these days: she really gives the reader a fully formed picture of the six key players. We get to know how they think, what they’re going through, and why they’re behaving in certain ways. These shifts in focus keep you turning the pages, keen to see what’s happening on another corner of the stage.

The Way  Back’s storyline is dominated by a crime – the abduction of young Charlie – but the book is really about the repercussions that crime has for the perpetrator, his victim, her family and one particular policeman. This is one of the best books about family I’ve read in a while. We get what feels like a very realistic peep behind the curtains of a so-called modern family, and the Dunphys they ain’t! I think working mothers and fathers alike will find much to empathise here, that’s if they can bear to read about a 13-year-old daughter being abducted and held captive. I don’t have kids and I still, mentally and emotionally, found it harrowing. Your mind just does not want to go there.

And there is a key theme of the book. When Charlie is gone, and she is gone for a horrendous length of time, both parents are focused on getting her back, on the joy of her return. What they don’t spend much time thinking about is what she will be like if and when she does make it home. And what they will all be like in return.

I won’t risk spoilers but Charlie’s reaction to being kidnapped and abused is fascinating. Thirteen is an age where most of us fear being seen as different. How different can you be from your peers when trashy women’s magazines are running false stories about you being kept as a sex slave? The avalanche of trauma, from Charlie’s actual experience in the shed where her kidnapper, Col, imprisons her, to the effect of news and social media, to the intrusive physical and mental probing from medical and police professionals, is deftly portrayed.

Kylie Ladd has a PhD in neuropsychology. She is adept at both depicting and manipulating emotions. I cried a number of times reading this book. Her ability to convincingly take us into the thoughts and feelings of everyone from 40-something parents to a teenage brother to a damaged and abandoned loner is really impressive.  From the moment Col comes into the book I was aware of an undercurrent of, if not sympathy, then at least empathy for his situation and what has led to it. What he does is monstrous but Ladd does not portray him as a monster. This is a more sophisticated and, dare I say, possibly realistic version of this kind of criminal then we get in ‘goodies and baddies’ news reporting and more simplistic fiction. It is yet another thing that distinguishes this book.

There’s a real Australian-ness to The Way Back that never slips into caricature. We get a great sense of place, from key Melbourne landmarks to the bushland where the pony club is located. Ladd has a naturalistic writing style that sees her stitch in a quick police procedural fact or a starkly brutal physical attack with equal grace and control. She is not a flowery writer; her metaphors are anchored in simple observations which somehow gives them more power. Take for example the way she describes the school life of Charlie’s older brother, Dan: “Like a river rushing around a rock, everyone simply went about their day as if he didn’t exist.” How clear but heart-breaking is that?

In her Author’s Note Ladd explains that, at the age of eight, one of her classmates was abducted from her bed and never returned. In The Way Back our missing girl comes home to mum and dad and for that we thank whatever deities we prefer. But is she the original Charlie and can she ever be? And if she’s not, what does that mean for those around her? This is one of the key questions at the centre of this gripping, thought-provoking book.