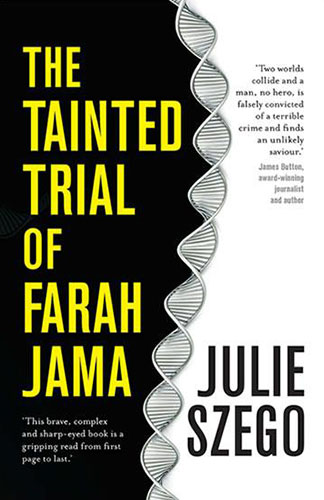 Author: Julie Szego
Publisher: Wild Dingo Press
Copyright Year: 2014
Review By: Anne Bruist
Book Synopsis:
In 2010, nearly 18 months after Jama’s incarceration, his conviction was overturned when a mother’s profound faith in her son’s innocence, a prosecutor’s tenacious pursuit of truth and justice and a defence lawyer’s belief in his client, brought forth revelations that overturned one of the worst miscarriages of justice in Victorian legal history,

I have a bit of an issue with true crime writing, largely around whether or not there is real value in ‘the public’s right to know’, which is the usual reason given for publishing details, usually of murders and the accompanying trial to ‘see justice done’. As a psychiatrist more concerned about the impact of prolonging the family’s grief in pursuit of salacious gossip (as it can appear to be), I consider this a significant ethical issue.

The crime at the centre of Szego’s book is not about a murder—it is about a rape. This brings up ethical issues thus about the victim, who is still alive. When she started the investigation she was working with the Jamah’s; the 19 year old accused was convicted and went to gaol for 16 months, and his mother steadfastly claimed he didn’t do it. Along the way, Jamah withdrew his consent and suggested that he would write his own story. If he does so, which seems unlikely, it will be his story, and a very different one to that which Szego has written.

Szego trained as a lawyer and works as a senior journalist with Fairfax. I heard her present and she stated that she agonised about whether to continue after the Jamah’s were no longer cooperating, but continued because she thought it was an important story to be told. I have already stated my reservations about the ethics of writing true crime, but with this book I am in complete agreement. This is a story that needs to be told—and for three very important reasons. The first is that this is a story of prejudices—not blatant, not of the sort we see on the news and think we would never do/say/think that, but that which is inchoate but equally as dangerous: think how many people believed Lindy Chamberlain killed her baby because she didn’t cry on camera. The second is our excessive reliance on science. Science here wasn’t wrong—but the fallible humans delivering it certainly were, not again so dissimilar to the Chamberlain case. Finally it is a wakeup call to us all—in this case it was the police, lawyers and jury that should have looked harder at why the science didn’t fit the facts—asking us to not just accept things that are handed to us. This young man tragically spent 16 months in gaol for a crime he didn’t do; and rape in Somali culture is considered every bit as bad if not worse as murder.

Szego presents a clear outline of what happened and why—the alleged rape of a woman in an over 28’s nightclub by a 19 year old who would not have been allowed inside and was not caught on camera, and who had an alibi on the other side of town, convicted on DNA evidence. There were people she wasn’t able to talk to/weren’t willing to talk to her, and some surprising ones that do, but she gives a balanced investigative report. A salutary tale written well.
Score: 4.5 out of 5