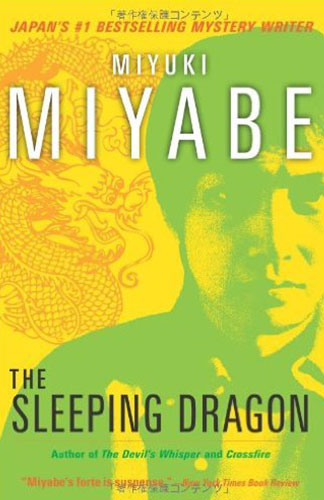 Someone has unlawfully removed a manhole cover, and a little boy out searching for a lost pet goes missing, possibly drowned in the sewers.

Is it murder or accidental? These events bring together a struggling journalist named Kosaka, who is grappling with the ghosts of his past, and two young men who may or may not have psychic powers. The three form an unwilling team not only to search for the lost boy, but also to solve a second mystery involving Kosaka’s former fiance.

Kosaka’s career and personal life have stagnated since his breakup with Saeko a few years earlier, and locked him in an emotional impasse. Each of his two reluctant comrades –Shinji and Naoya– is struggling to come to terms with his unique powers (“the dragon within”). While Shinji wants to use his abilities to help others, Naoya seeks to hide his.

Kosaka, meanwhile, doubts the young men’s ability, all-too-clearly aware that such claims of psychic knowledge of the crimes could in reality mask a criminal culpability. But then all three are forced into an unsteady alliance to try to save the life of someone close to Kosaka.

On the cover of THE SLEEPING DRAGON, Miyuki Miyabe is noted as Japan’s Number 1 bestselling Mystery Writer, known for her ability to write strong suspense novels. Which made this particular book an interesting prospect, even allowing for the inclusion of an ESP sub-thread which isn’t often something I’m particularly comfortable with.

But I am very comfortable with something that has a strong sense of place, and a strong sense of the culture that it comes from. Even allowing for the novel being translated, there remained something quintessentially Japanese about this book. Considered, subdued even, the story of THE SLEEPING DRAGON is told in a sparse, careful and thoughtful manner, particularly given the central premise of the book – whether or not a careless or even reckless act is murder, whether or not you know who did it.

The book is telling a complicated story. The disappearance of a little boy, the identification of who moved the manhole cover, their reactions and everyone’s belief about culpability. The pairing of an older, life-worn journalist Kosaka, and the young psychic teenager Shinji. The relationship between Shinji and Naoya, and Naoya’s struggle with his own psychic ability. Intertwined friendships, the past returning to affect the present, love lost, good and bad new relationships, and the whole catastrophe.

Despite the complications of the various sub-threads throughout the book, there is a stately progression, more than a thriller style ride.

The whole book does not, however, concentrate on the “mystery” or the loss of the little boy. There are other aspects to the people within the story that frequently take centre stage. Because of that, this is not a “traditional” mystery in which a crime is committed, an investigation undertaken, and a resolution arrived at. This is a book which resolves a mystery, and looks deep into the consequences of that mystery, and to the fall out in the lives of the people involved.

Within this context, the ESP sub-thread is really more about the battle that somebody with a different “gift” in life has in dealing with the consequences of that gift.

I doubt very strongly that this would be a book that dedicated fast paced thriller fans are going to find exactly their cup of tea. I suspect that fans of the crime straight through to resolution style of mystery fiction may also find it a little disappointing, but I must admit I thoroughly enjoyed THE SLEEPING DRAGON. I found the style of storytelling very engaging, the intricacies of the lives that the book looked at absorbing, the moral dilemmas raised, addressed or never resolved realistic and quite challenging. The style of the book felt Japanese to me, but the characters within the story, and the battles that they fought, essentially very human and realistic.