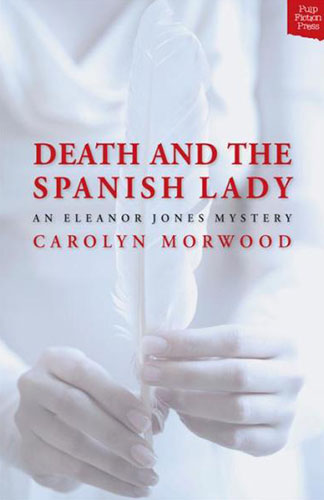 Author: Carolyn Morwood
Publisher: Pulp Fiction Press
Copyright Year: 2011
ISBN: 9780975112939
Review By: Karen Chisholm
Book Synopsis:
Death and the Spanish Lady is the first novel in a trilogy featuring Sister Eleanor Jones. The year is 1919 and Eleanor has returned to Melbourne after nursing in France. Her intention to knit herself up after war is played out against a richly realised Melbourne and undermined by a new and terrifying danger.

The Spanish Flu has travelled to Australia with the returning troop ships. When Eleanor signs up to work at the Exhibition Hospital she finds herself battling both the flu and a different kind of foe entirely. One who selects their target with deadly precision and a lethal dose of poison.

DEATH AND THE SPANISH LADY is the first book from Carolyn Morwood for quite a while, and that, if for no other reason was enough to create some interest in these parts. Set in the period immediately following World War 1, in Melbourne, during the Spanish ‘Flu epidemic of 1919, the book introduces Sister Eleanor Jones. Returned from nursing soldiers overseas, she has volunteered to work in the temporary hospital that is set up within the Melbourne Exhibition Buildings to treat the huge number of patients who succumb to the epidemic.

Given the number of people dying from the ‘flu it seems somewhat incongruous that the death of one man, a soldier who has a less than impressive background before or during the war, should cause a stir, but murder is murder, and Jones, working late in the evening in the convalescent ward, has seen something out of place on the night that Reddy died – as it turns out – from arsenic poisoning. The subsequent disappearance of another recovering soldier, Jimmy Cotton seems to be an admission of guilt to the authorities, but Jones is not convinced.

Asked to look into the entire matter by the Matron of the hospital, she commences her own investigation.

DEATH AND THE SPANISH LADY does a really convincing job at drawing a picture of Melbourne in that time, during that epidemic. The atmosphere of a city in lock-down and the hospital hastily put together within the confines of the Exhibition Building was particularly well drawn. There is an excellent feeling for how life was lived in Melbourne in that time

– the unusualness of private cars; the farming family with a farm in Dimboola and a Collins Street residence; the affect of the Great War on so many families – now left mostly female, and frequently utterly bereft at the death or injury of so many men.

Unfortunately there are a few points at which the action drags, and you can’t help feeling that the assistance of an editor would have helped Morwood create a tighter story. Certainly the denouement was too padded, which was a pity as it was not so much of a “who did it” by that point, but the “why did it” deserved clearer and more direct focus.

Aside from the padding, Sister Eleanor Jones is a really interesting character, a female protagonist with a troubled background, a returned nurse from a war fighting her own demons as a result. It’s rather pleasing to know that DEATH AND THE SPANISH LADY is the first of a trilogy, as more books will give us all a chance to get to know her, and the Victoria that she lives in better.

Carolyn Morwood is a great storyteller and her novels are enhanced by the richness of the history that she wraps her stories around and this book is no exception.  What I particularly like about her writing is the pace at which she takes the reader through the story, imparting knowledge and creating tension through situation and character, towards the final reveal.  Carolyn does a lot of research and her books are enhanced by the historical accuracy.

Death and the Spanish Lady describes Melbourne in 1919 in the grip of a major pandemic.  The soldiers, who have already suffered a great deal, have come home to a deadly disease, the Spanish Flu.  It has impacted Melbourne so much that the Exhibition Building had to be set up as a hospital and the already weary nurses returning from WW1 had to put their uniforms back on and go into battle again.  One patient, a returned soldier with a murky past, is murdered and Eleanor Jones, a nurse, is determined to find the culprit because she believes that the police have the wrong suspect in their sites, Jimmy Cotton, who Eleanor has a great fondness for as a result of nursing him during the War.  Eleanor takes us into the lives of her colleagues and friends as she searches for the evidence she needs to prove the police wrong.  We also see a Melbourne where entertainment venues are closed and people only venture out if absolutely necessary and never without a mask.  A very different Melbourne to Marvellous Melbourne and to the Melbourne we know today.  This is a great story and it was very difficult to put down once I started reading it.  I loved the history and the fiction and both were woven very well into a believable and fascinating story.