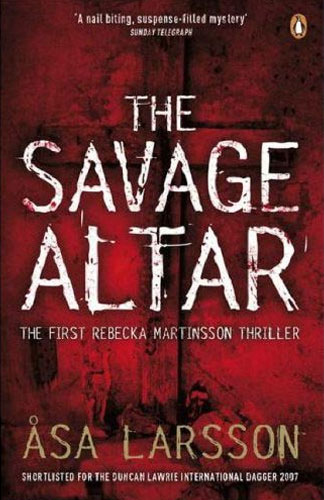 Author: Asa Larsson
Publisher: Penguin Books
Copyright Year: 2008
ISBN: 0141024712
Review By: Sue Turnbull
Book Synopsis:
Innocence will be sacrificed…On the floor of a church in northern Sweden, the body of a man lies ritually mutilated and defiled and in the night sky, the aurora borealis dances as the snow begins to fall. Rebecka Martinsson is heading home to Kiruna, the small town she left in disgrace years before. A Stockholm tax lawyer, Rebecka has a good reason to return: her friend Sanna, whose brother has been horrifically murdered in the church of the cult he helped create. Beautiful and fragile, Sanna needs someone like Rebecka to remove the shadow of guilt that is engulfing her, to forestall an ambitious prosecutor, and to confront the rumours circulating in a closed and frightened community. But to help her friend, and to find the real killer of a man she once adored and is now not sure she ever knew, Rebecka must relive the darkness she left behind in Kiruna, delve into a sordid conspiracy of deceit, and confront a killer whose motives are dark and impossible to guess…

If the prospect of a crime novel featuring a Swedish tax lawyer doesn’t sound too promising, let me reassure you that The Savage Altar is both intriguing and riveting. Set in far North Sweden it takes us into the world of religious fervour and dysfunctional families played out under the shimmering lights of the Aurora Borealis.

It all begins with the mutilated body of the charismatic Viktor Strandgård, alias the Paradise Boy, discovered in the central aisle of the magnificent Crystal Church. This architecturally improbable structure, complete with a glass ceiling enabling a wary eye to be kept on the heavens, is the booming centre of a religious revivalist movement. It’s managed by three creepy pastors and funded largely by the proceeds of Viktor’s best selling book about a brief sojourn with God occasioned by a near-fatal bicycle accident.

Summoned from Stockholm by Viktor’s sister who is a suspect in his murder, Rebecka returns to her remote home town where the skeletons jostle for elbow room in the closet. And so begin the flashbacks as Rebecka rediscovers why she left home in the first place.

Meanwhile, heavily pregnant Inspector Anna-Maria Mella hauls herself our of bed and trudges through the sub-arctic Winter to assist in the investigation of Viktor’s murder in a dogged and unflappable manner reminiscent of France’s McDormand’s wonderful policewoman, Marge Gunderson, in the Coen Brothers film Fargo. One of the best things about this book is the strong, no nonsense female characters.

It’s hard to know with a translation just how good the prose style of the original might be, but Marlene Delargy appears to have done an excellent job with the English. From the translation of a Swedish poem with which the book opens, to the rendition of convincing Swedish cop-speak, this is a beautifully executed book which gathers momentum as it toboggans towards a dramatic conclusion in the snow. Henning Mankell may not be the only cunning Swede on the block.