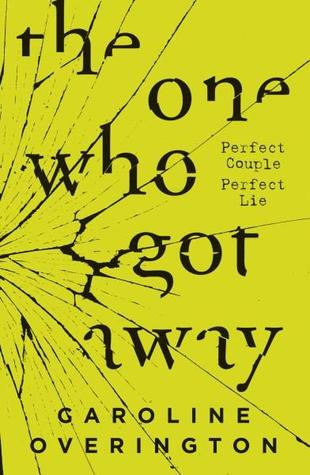 Loren Wynne- Estes appears to have it all: she’s the girl from the wrong side of the tracks who’s landed a handsome husband, a stunning home, a fleet of shiny cars and two beautiful daughters…. then one day a fellow parent taps Loren on the shoulder outside the grand school, hands her a note … and suddenly everything’s at stake.

Loren’s Facebook-perfect marriage is spectacularly exposed – revealing an underbelly of lies and betrayal. What is uncovered will scandalise a small town, destroy lives and leave a family divided.

But who is to be believed and who is to blame? Will the right person be brought to justice or is there one who got away?

High expectations are hard to live up to, and that’s what I started with, opening award winning journalist Caroline Overington’s latest psychological thriller.

Having loved her earlier works – I Came to Say Goodbye being the most memorable for its real characters, Australian setting and original story – I looked forward to more of the same.  Did she deliver?

The One Who Got Away centres around the disappearance of Loren; a beautiful mother of twins whose Facebook-perfect marriage to a rich, charming, businessmen is spectacularly exposed when she fails to return home from her ‘second honeymoon’ aboard a cruise-ship.

For many Australian readers, part of the appeal of local writers is the familiarity of culture and landscape, which was lacking in this California set-story. I understand Overington spent a year in the US, and wanted her surrounds to inspire her. I can totally understand that, yet I felt the novel provided little fresh offerings on living in La la land (and reading ‘Mom’ grated a little).  I also found the casual writing style off-putting in the early chapters, with the step-sisters’ voices indistinct from each other, and  the emotions lacking in depth.  I couldn’t say I warmed to either of them, but the quick pace and suspense of what really happened to Loren on that boat kept me reading (not to mention the ‘twist’ that other reviews had me primed for).  Would I have kept reading if I didn’t have such respect for the author and the intriguing premise? Not sure. However, I persevered, and I was glad I did.

The story was carved into parts of roving first person narrative from the perspectives of the victim, her step-sister, husband (the suspect) a reporter and a judge at different stages of the investigation. This clever approach provided a clear structure that kept me engaged and allowed me to try to unravel the truth amongst the rather unreliable narrators (which, to the author’s credit, I never did). It certainly kept me reading. I was completely surprised by the ending – with very few signposts (for me, at least) to point towards that end.  The problem with plot-driven stories that hinge so heavily on the final unravelling is that often, to keep the twist surprising, authentic reactions and real emotions of the characters are sacrificed. It is those raw emotions that draw me to novels, and are a strength of Overington’s earlier works. But alas, if she’d shared authentic reactions about how they all felt about the tragic situation, the ending would have been rather obvious. I have to remember this is a crime novel, not a women’s fiction, and a cleverly-plotted crime is what she delivered.

The One Who Got Away is a fast paced, easy read with many twists and turns that keep you guessing to the end, but I’m hanging out for some of the Aussie-set, heart-wrenching stories that absorbed me in Overington’s earlier works.