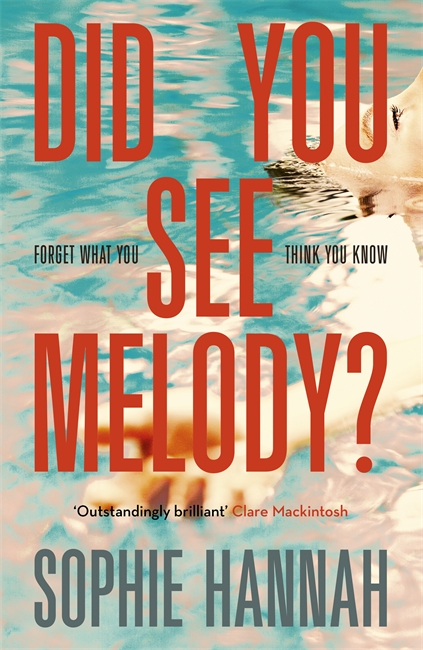 Pushed to breaking point, Cara Burrows abandons her home and family and escapes to a five-star spa resort she can’t afford. Late at night, exhausted and desperate, she lets herself into her hotel room and is shocked to find it already occupied – by a man and a teenage girl.

A simple mistake on the part of the hotel receptionist – but Cara’s fear intensifies when she works out that the girl she saw alive and well in the hotel room is someone she can’t possibly have seen: the most famous murder victim in the country, Melody Chapa, whose parents are serving life sentences for her murder.

Cara doesn’t know what to trust: everything she’s read and heard about the case, or the evidence of her own eyes. Did she really see Melody? And is she prepared to ask herself that question and answer it honestly if it means risking her own life?

As the author authorised by the Agatha Christie estate to write fresh novels starring Hercule Poirot, Sophie Hannah knows her Christie life history, and in her new standalone novel Did You See Melody? she creates an equivalent of a difficult patch in Agatha’s first marriage. In 1926, aged 36 and a celebrated detective fiction author, Agatha Christie vanished. Eleven days later she was located staying under an assumed name (that of her husband’s mistress) at the comfortable Swan Hydro hotel in the spa town of Harrogate. In 2016 On the Blue Train by Australian author Kristel Thornell reworked this episode as fiction. Earlier there was a comparable novel by Kathleen Tynan, and various non-fiction books have included speculation about Christie’s motives and state of mind during this out-of-character episode.

Hannah’s contribution is to devise a modern-day equivalent scenario without explicitly referencing Christie. She gives her 30-something Englishwoman protagonist Cara a personal family-based crisis. Impulsively deciding she needs time alone and distance, Cara flies to Arizona, where she has booked into a luxurious hotel complex. Her husband and two teenage children are left none the wiser, her note informing them only that she will be back in two weeks, on 24 October 2017.

Once Hannah has her protagonist installed in the Swallowtail Resort and Spa, the novel starts to shape up as a cosy. Tick the boxes: the remote and closed-off environment, the protagonist’s separation from her smart phone, disturbing messages, hushed-up claims, and room number mix ups. Let’s call this kind of cosy Spa Noir. I can think of a few UK crime stories and TV series that have despatched detectives, amateur sleuths or potential victims to dubious spas and health and therapy institutes. (And, of course, there have been distinguished European fictions set in isolated health facilities and towns.) Hannah has fun Americanising and monetising her cosy setting, equipping the spa with fabulous cocktails, perpetually upbeat staffers and gabby fellow guests whose intrusions jar on the restrained, privacy-seeking Cara.

Since the real-life 2007 drama of UK child Madeleine McCann disappearing from an apartment in Portugal and her parents initially being treated as the prime suspects, there has been an extraordinary volume of reporting and writing about the McCann case. Inevitably some British crime fictions have featured similar accounts of pretty, young white girls who have vanished, perhaps having been abducted, and novels in other languages have also centred on parallels to the McCann mystery: see, for instance, Lycke by Mikaela Bley.

Hannah’s storyline features the fictional Melody Chapa, who vanished in Philadelphia in 2010, aged seven. With Melody’s body never having been found, doubts persist as to what happened and who was responsible. Hannah’s Cara inadvertently learns about the Chapa case at the spa resort when she first encounters a crying, childish girl in her early teens and then overhears an elderly guest claiming she has sighted the missing Melody. Her concern piqued, Cara chases up accounts of the case and on YouTube watches interviews conducted by the bold-as-brass lawyer-journalist Bonnie Juno on her TV program Justice with Bonnie.

Events at the spa progress day by day, mostly related in detail in the first person by Cara. With plenty of dialogue and some amusing observations on contrasts between UK and US customs, Cara’s account is easy to read. It is interspersed with more formally worded transcripts from the Melody archive and short prose pieces that seem to have been written by or on behalf of the girl. Can Cara determine whether the girl she glimpsed really is Melody? And if the girl is Melody, can Cara figure out how she comes to be staying in an Arizona resort while her parents, ruled guilty of her murder on the grounds of circumstantial evidence, are locked up in gaol?

The pace of the problem solving is slow and, as in Hannah’s Poirot plots, some of the many apparently irrelevant details turn out to matter. An odd amalgam of seriously important subject matter and throwaway trivialities, Did You See Melody? is recommended to patient readers interested enough in the psychology of families to think about domestic crimes and misdemeanours while confined by the author to an ultra-commercial, media-infused milieu.