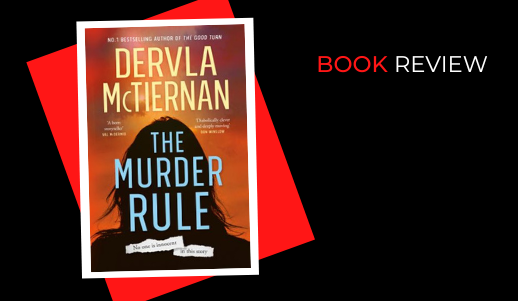 Second Rule: Make them need you.

They think I’m a young, idealistic law student, that I’m passionate about reforming a corrupt and brutal system.

They think I’m working hard to impress them.

They think I’m here to save an innocent man on death row.

(Previously published in The Weekend Australian on 28-29 May 2022 and reproduced with consent).

Many Innocence Project cases would make stirring stories of justice-seeking. Just think of all those people who have been wrongfully imprisoned and even sentenced to death, and all those well-intentioned law students championing them. But what if an author created a student set on subverting the Innocence Project from within? Now that’s a plot, and Dervla McTiernan owns it in The Murder Rule.

A man named Michael Dandridge has been convicted of rape and murder and has served 11 years. Now, in 2019, his conviction has been vacated, a retrial is imminent, and University of Virginia’s Innocence Project wants him exonerated. Intent on volunteering on this case, Hannah Rokeby cons herself onto team Dandridge and sneakily sets about hunting for the means to reconvict.

To understand the “why?” we must look to Hannah’s emotionally complex ties with her alcoholic single-parent mother, Laura. (Readers may be reminded of the pitiful girl and boy at the start of McTiernan’s The Ruin and that girl’s subsequent distancing of herself.) Entries from a diary written by Laura describe troubling events years earlier, when she was learning about sex, aggression, and the scent of wealth. Discovering and secretly reading this journal, Hannah has been fired up on her mother’s behalf.

Though interspersed with diary entries and a few legal explanations, the mission narrative proceeds briskly, McTiernan’s unobtrusive prose style facilitating the flow. Relating Hannah’s moves in the third person, McTiernan manages a balance between conveying her protagonist’s feelings and keeping a moral distance. Toward the end there is high-risk drama of the hairpin bend variety plus some terrific narrative twists.

Since most US Innocence Project clients are not well-connected white men, potential readers may have reservations about McTiernan’s character choices. In her defence it’s worth noting that a fiction interrogating the ethical compromises made by people with some degree of privilege may encourage readers to scrutinise their own ethical shortcuts and self-excusing.