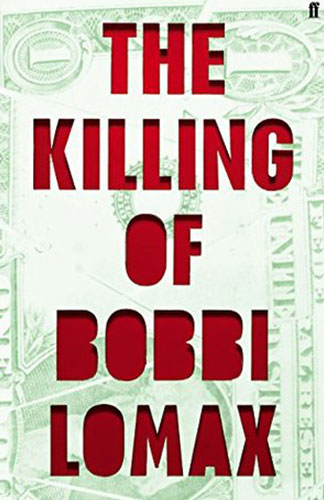 Just moments later one of the nails from the city’s second bomb forced its way into the brain of property investor Peter Gudsen, killing him almost instantly.

The third bomb didn’t quite kill Clark Houseman. Hovering on the brink, the rare books dealer turns out to be Detectives Sinclair and Alvarez’s best hope of finding out what linked these unlikely victims, and who wanted them dead and why. But can they find the bomber before he kills again?
Set deep in the religious heartlands of America, The Killing of Bobbi Lomax follows this troubled investigation as a narrative of deceit, corruption and forgery emerges, with an unlikely hero at its heart – a rare coins, books and manuscript dealer – who could either be a genius or the devil.

Cal Moriarty’s debut novel shows her to be a witty, tough-minded, independent author who isn’t afraid of putting organised religion and financial chicanery by the supposedly devout at the centre of her narrative. British Moriarty spent time in the early 1980s working in the US as a private investigator, and she’s able to get away with telling an all-American story set in 1982-83 in a desert city dominated by members of a religion that calls itself The Faith. This Faith, the fastest growing religion in the world, resembles Mormonism in its chequered history and convoluted narratives of how it came into being. In its day-to-day practices in matters such as diet it is like the Seventh-day Adventist Church and other austere Protestant movements.

Readers are obliged to feel what it is like to live in an isolated community with such quietly threatening religious and customary constraints that there is little personal freedom, those who want to do anything different having to become hypocrites or settle for ostracism. How would it be, Moriarty asks inter alia, if comparable social controls spread, encroaching on us all?

Moriarty tells her tale in terse, idiomatic American-style prose and dialogue, so much so that I found the opening pages hard to read and comprehend. Once her dual narrative was established I found the going easier and was glad I’d persevered. The chapters tracking the activities of a rare book, document and coin dealer who has turned to forgery and counterfeiting are engrossing. Staying with con-man Clark Houseman from July 1982 through to October 1983 as he pulls off fraudulent deals and takes increasing risks is like the experience of reading one of those Patricia Highsmith novels told from the point of view of a lone wrong-doer.

As Houseman’s bravado builds, he sets up a prospective deal that will not only earn him millions but profoundly compromise the Faith. With Faith leaders fending off their splinter-group rivals, the Real Faith based in Reno, and assiduously trying to hide any papers that reveal unwanted truths such as the polygamy of their founding Prophet, Houseman is keen to have them buy and bury a ‘primary document’ he has confected. At the same time Houseman’s auction room shenanigans in Los Angeles have pitched him into the company of wealthy collectors and investors who are far cannier operators than he will ever be.

The complementary chapters cover events beginning at the end of October 1983, when three bombings shock Abraham City. Victim one, Bobbi Lomax, was a non-entity except that she was the new young trophy wife of a businessman whose complex dealings had produced some three thousand disgruntled financial casualties. I can’t see any good reason why Bobbi’s name stars in the novel’s title, although it has to be said a genre novel about a Bobbi sounds more saleable than a novel about a religion.

Victim two, Peter Gudsen, was a property investor, an ex-business partner of Arnold Lomax, and a Faith archivist. Houseman, the third bombing victim, has survived but is incommunicado in hospital; before lapsing into unconsciousness he named someone called Cliff Hartman as trying to kill him. Police partners Marty and Al busy themselves trying to find out why the murderous attacks happened and whether these three individuals were the intended victims. A few days into the investigation their task is complicated by a fourth explosion, this one killing a dog walker.

On paper Marty and Al have distinctly different characteristics. Family-man Al is of Hispanic origin and is a Catholic, thus being a living contrast to the WASPish Faith members. Bereaved Marty grew up in Abraham City and has useful connections within the Faith and its tentacles, including the judiciary. In practice I could not tell the detectives’ voices apart and this didn’t matter much since the two men worked co-operatively. Here’s a sample:

‘Count yourselves lucky,’ said Marty.
‘What now?’ said Al.
‘I’m going to get us our warrants.’
Al raised his eyebrows. ‘From on high?’
‘Pretty close.’
‘You want an assist?’
‘Better I go on my own.’

There are allusions to the back-story of each man, and Moriarty has told an interviewer she is now writing a prequel to Bobbi Lomax, setting it in the 1960s in LA and featuring the same pair of cops.

The projected sequence of four novels is called the Wonderland series, and if the next books are like Bobbi Lomax in spirit they will contain quite a lot of whimsy and satire à la Lewis Carroll’s Alice’s Adventures in Wonderland. There are some nicely fantastical secondary characters in this first novel, and it’s not impossible one or two may turn up again. I’ll be watching out for Ziggy, a hippie-type who lives in a hut constructed of books laid like bricks. He scavenged the books from the garbage put out by the Faith’s Mission. They’re all books the Faith has banned. When Ziggy wants to read, he goes for thrillers. And when he wants to eat he passes books to the waitress in the nearby diner in exchange for schnitzel and apple pie.