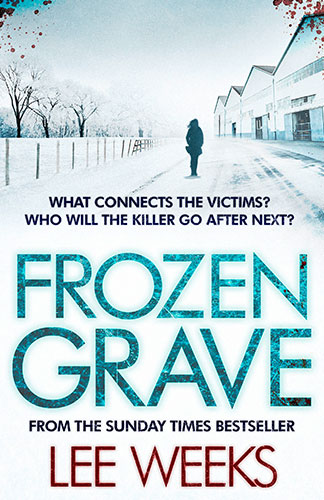 Author: Lee Weeks
Publisher: Simon and Schuster
Copyright Year: 2014
Review By: Robyn Walton
Book Synopsis:
From the author of the bestselling Dead of Winter and Cold As Ice comes a page-turning new thriller that will have you hooked from start to finish.

The first body is found in London’s East End – a middle-aged woman, brutally murdered.
The second body turns up in a disused quarry, attracting the attention of DI Carter and DC Willis. They had interviewed the dead man, JJ Ellerman, about his links to the first crime, and somebody wanted to stop him talking.

And then the third body is found, and it becomes clear a serial killer is on the loose. What connects the victims? And who will the killer go after next?

English author Lee Weeks puts out a new crime novel almost every year, and her works are rating higher and higher on British bestseller lists. Weeks produced four titles in her Johnny Mann series (2008-2010) featuring a Hong Kong detective, then began her Willis/Carter series, based on a London murder squad. There have been three Willis/Carter novels (2012-2014), with Frozen Grave the most recently released; a fourth in the series is due out in late 2015.

I have to admit to having been oblivious to Weeks’ prolific output and successes until I discovered Frozen Grave in my local library, and I can’t say I feel better about myself for having finished the novel. Not that it’s schlock, but neither does it raise the bar for the standard of writing in the crime genre. Weeks’ plot relies on commercial and sensational staples: a serial killer, online sex sites, attractive female victims, a crazed knife attack, financial fraud, and fantasies of living in sunny Spain. Throw in a number of chapters centred on the prime suspect, J. J. Ellerman, a sleazy gentleman who is trying to manage exploitative relationships with half a dozen women but is deteriorating into alcohol dependence and breakdown. Add a soupcon of women’s solidarity and a female detective with a clutch of personal crises, and you have an entertaining time-killer pitched to women readers and running to almost 450 pages. There’s even a loyal dog, with some moments seen through her eyes:
Sandy woke instantly from a deep sleep when she heard someone approach. She had learnt to stay absolutely still, next to her master, and to strike at the last minute if the threat came too near him.

With the initial ambush murder happening in the territory of East London’s ‘rough sleepers’, Weeks is able to include instances of the troubled lives and premature deaths of the homeless. Their world contrasts with the upmarket milieu of Richmond, where Ellerman and his grieving and embittered wife live beyond their means, and with the mid-range homes of the capable, solvent women whom Ellerman targets for their money under the guise of enjoying casual hook-ups.

Most of the action happens outdoors or in women’s homes in the south-west counties. Quite a few episodes in the novel would be telegenic, and I imagine Weeks is angling for a series. The structuring of the storyline, the differentiation of the numerous characters and the use of dialogue are all skilful. Unfortunately the climactic violence of this book, staged after dark in a spectacularly harsh area of Dartmoor, is delivered abruptly and without enough explanation on either the psychological or logistical levels. I guess the deadline was close. Nonetheless Weeks’ editor should have insisted on an expansion and rewrite of the closing chapters as well as a thorough proofread of the whole text.