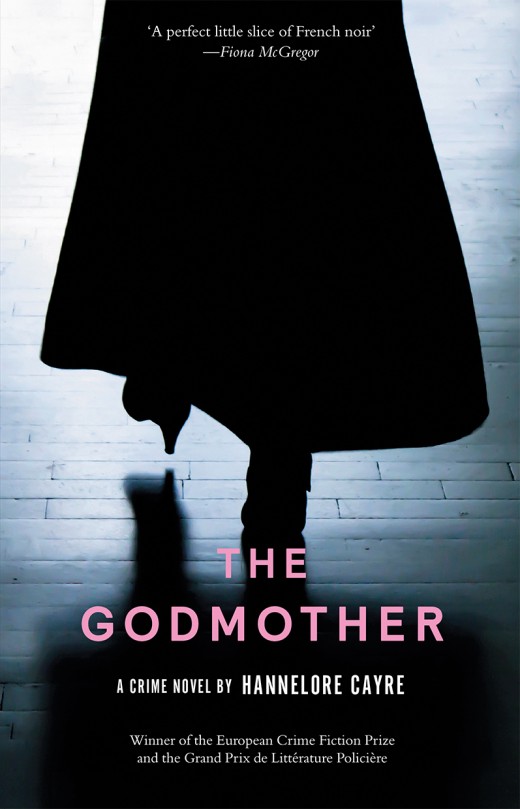 Meet Patience Portefeux, fifty-three, an underpaid French-Arabic translator who specialises in police phone taps. Widowed after the sudden death of her husband, Patience is wedged between the costs of raising her daughters and the nursing home fees for her ageing mother. She’s laboured for twenty-five years to keep everyone’s heads above water.

Happening upon an especially revealing set of wiretaps ahead of all other authorities, Patience makes a life-altering decision that sees her intervening in – and infiltrating – the machinations of a massive drug deal. She thus embarks on an entirely new career path: Patience becomes ‘the Godmother’.

With a gallery of traffickers, dealers, police officers and politicians more real than life itself, and an unforgettable woman at its centre, Hannelore Cayre’s bestselling novel shines a torchlight on a European criminal underworld that has rarely been seen, casting a piercing and darkly humorous gaze on everyday survival in con­temporary France.

When people haughtily tell me they “never read crime”, The Godmother is the type of book I like to turn them onto. Yes, it has crime at its heart, a whole urban criminal underbelly in fact, but it also presents a slew of revelations for the casual reader, traversing everything from racial tensions in contemporary France, to the plight of the working poor, to the depressing world of aged care, the banal chores of drug dealing, and even a potted history of French Tunisia. It’s also laugh-out-loud funny.

This is a quick read in terms of being quite a slim book but it also one with a deftly handled pace, managing to provide the reader with a lot of action and a lot of great ideas to ponder.

Our heroine Patience has had an interesting but tough life. The only child of wealthy, crime-conversant parents, she marries an equally wealthy man and commences what initially looks like a gilded family life with him and her two small daughters. When the husband suddenly drops dead and her mother squanders all the family money, Patience is left in an impecunious state and spends years grafting away as a squeaky clean, very badly paid freelance translator in the legal profession, helping bring (predominantly) drug dealers to alleged justice.

The way she ends up with a huge amount of an illegal substance that could make her a fortune if only she can work out how to get it onto the street is the focus of the first half of the book. There is no mystery as to why The Godmother has been adapted as a movie starring French actresses, Isabelle Huppert. There is much more physical exertion, messy logistics, and, in Patience’s case disguises, involved in the drug dealing business than one might expect. Hannelore Cayre’s deceptively breezy style makes light work of all the machinations and you can visualise the antics going on as you turn each page.

Told in the first person, from Patience’s point of view, the book fulfils the law laid down in every writing class around the world in terms of kicking off with a great first sentence and being entirely gripping in the first ten pages. The translation by Stephanie Smee must come in for praise too. I’m not sure how the process works but she has managed to preserve what is obviously Cayre’s brilliantly-created character with a unique voice, giving us wonderful turns of phrase and myriad pop culture references.

Take the example of Patience reflecting on the French-born Tony Montana wannabes she has to put up with once she has morphed into the “godmother” of the title. They throw around the odd Arabic phrase and they posture a lot but they don’t actually know their language or much about the country of their ancestors. Because of this she calls them “hydroponic Moroccans” – their “roots exposed”.

There is genuine dark violence and crime in this book, plus really painful realities when it comes to Patience watching her quite tricky mother whither in a nursing home, taken care of (or not) by hugely overworked, underpaid immigrant staff. But, there is so much wry, observant humour to balance it and I’m sure this is what has attracted so much attention and affection for the book. The Godmother won the European Crime Fiction Prize and the Grand Prix de Littérature Policière, France’s most prestigious prize for crime fiction.

When discussing the drug dealers whose conversations she is paid to translate for the police, Patience tells us that, whether they’re in the “slammer” or not, they’re all on social media, with posts that make them look like they’re “working at Louis Vuitton and studying at Harvard”.

Yet alongside these amusing moments are big ideas peppered throughout, including things like the “21st-century-sigh” Patience recognises in her grown daughters. She describes it as the one they let out when they “see the corpses of children washed up on beaches, forests burning, animals dying …”.

On top of all this, the formatting of the book adds interest in that we often see transcripts of the conversations Patience is translating as part of her work. They’re laid out in a distinct way and they progress the story while also taking us inside the minds and conversations of the criminal masterminds (not) the police are intercepting. They’re also the way that “the godmother” keeps a tab on the movements of some of her dealer-customers and keeps on top of what the police do and do not know. This becomes quite an advantage as her adventure plays out.

In The Godmother I sensed echoes of Ripley and Patricia Highsmith – in a good way. Patience is not the sociopath that Tom Ripley is and Cayre does not have the dark authorial presence of Highsmith but there are commonalities in terms of a central villain who happens to be an astute observer of human nature and frailties, one who appreciates the finer things in life, is not adverse to black humour and who is able to explain away their actions in ways that you find yourself understanding while not necessarily condoning.