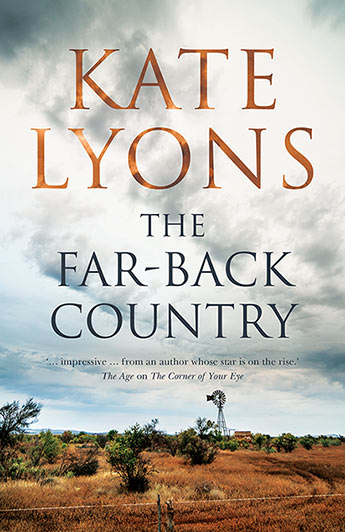 In 1979, at the age of fourteen, Ray McCullough ran away from his home on a western New South Wales sheep property following a violent confrontation with his dad, Jim McCullough. He left behind his mother, Delly, and his sisters, Ursula and Tilda.

Now forty-one, Ray works as an itinerant cook and labourer across the remote outback. A practical man in love with history and landscape, Ray leads a solitary life, convinced he’s inherited Jim’s streak of violence. Ray has spent his life running away from memories of family and home.

When the body of a man is found in a country pub along with Ray’s identification, Ursula believes that she can finally lay to rest the search that has defined most of her adult life. After Ursula collects Ray’s belongings, she begins to follow the tracks left by Ray across the far-back country, each one leading her closer to understanding the man he became and why he disappeared all those years ago.

At the start of Kate Lyons’ extraordinary novel The Far-back Country, “Delly” dies.

A man, Ray, is “on the edge of things” when the death occurs, working under a scorching sun to build a fence on a remote property. We learn two important things: that he has a constant urge to be elsewhere – by tomorrow he wants to be “as far from here as half a tank of petrol will allow” – and that he is at risk in his isolated surroundings, a dust-dry landscape littered with old mineshafts and the bones of dead animals.

Six months later two women, Ursula and Tilda, are in a dingy country pub, packing up the scant belongings of a man who has died. It is not immediately clear who this man is. If it is Ray, how has he come to this end? If it is not Ray, where might he be? As the narrative progresses, we learn that Ray had left home abruptly, at the age of 14, and that Ursula has been looking for him ever since.

The main narrative driver in the book is Ursula’s quest to find Ray, and on one level the key mystery is his reason for leaving.

The elements which will gradually resolve into an answer build up through the story, layer by layer, memory by memory, incident by incident. Lyons is sparing and artful in the way she ekes out the context and backstory of her main characters, so that the image we form of them – and their relationship to each other – constantly shapeshifts. Her deft handling of questions of identity and motivation by itself makes this work an achievement. And when the explanation for Ray’s departure comes, it is certainly shocking.

But there is a second, thrilling, source of suspense in the narrative timeline.

The story’s focus alternates between Ray and Ursula. Their timelines begin at different points, move at different paces, and occasionally seem to double back on themselves, just as the characters move on different courses through the same locations, their paths criss-crossing without converging. As the novel progresses, the gap between the timelines narrows, so that by the last few chapters the urgent question is whether Ray and Ursula will finally meet in a shared present, and, if so, will they both still be alive?

This reviewer, for one, sat up all night to find out.

The Far-back Country came out in 2018, and it is apparently Lyons’ first novel since 2006. I don’t recall seeing the book reviewed when it was published but may have missed this. Some of the themes Lyons touches on – masculinity, responsibility, the roots of violence and its impact on perpetrator, victim and observer – also underpin Tim Winton’s The Shepherd’s Hut, which launched just a few months earlier. Perhaps Lyons’ book, covering not dissimilar territory, was overshadowed at the time, but it’s a worthwhile piece of work, deserving of attention.

Nonetheless I have two quibbles. The obliquity of the narrative in the early chapters was frustrating; ambiguity around identity and relationships is crucial to the mystery, but a reader needs enough of a sense of main characters early on to decide to invest in them. Here I needed to persevere to fully engage with either Ray or Ursula. Lyons is also a short-story writer; a certain amount of indirectness can work extremely well at the opening of shorter fiction, where the questions it raises tantalise for a relatively brief while before answers begin to crystallise. Achieving the same effect in longer fiction requires very deliberate pacing. I’m not sure that Lyons gets it quite right here.

My other quibble relates to the timeline. Often where there are two points of view and differing timelines the shifts are, if you will, date-stamped. Here Lyons specifies the timing only of the first two chapters. This does create confusion later on, as the reader struggles to pinpoint not just where but when each character is during key events.  Eventually this uncertainty becomes part of the suspense – but again we are well into the book before this happens. Would it have reduced the tension to label the timelines? Perhaps – but perhaps not.

These are minor issues. Overall Lyon’s book is a gripping mystery with a nuanced exposition of character and theme. It rewards a reader’s patience in spades.

Her previous novels are The Water Underneath (2001) and The Corner of Your Eye (2006). I will be seeking them out – and eagerly anticipating her next title.