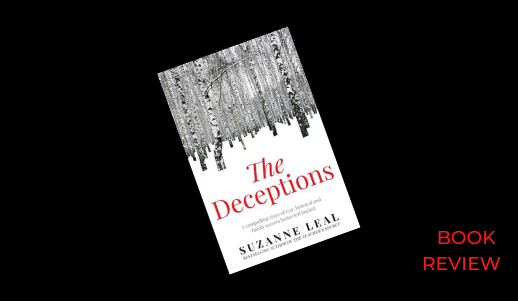 Moving from wartime Europe to modern day Australia, The Deceptions is a powerful story of old transgressions, unexpected revelations and the legacy of lives built on lies and deceit.

Prague, 1943. Taken from her home in Prague, Hana Lederova finds herself imprisoned in the Jewish ghetto of Theresienstadt, where she is forced to endure appalling deprivation and the imminent threat of transportation to the east. When she attracts the attention of the Czech gendarme who becomes her guard, Hana reluctantly accepts his advances, hoping for the protection she so desperately needs.

Sydney, 2010. Manipulated into a liaison with her married boss, Tessa knows she needs to end it, but how? Tessa’s grandmother, Irena, also has something to hide. Harkening back to the Second World War, hers is a carefully kept secret that, if revealed, would send shockwaves well beyond her own fractured family.

Inspired by a true story of wartime betrayal, The Deceptions is a searing, compassionate tale of love and duplicity-and family secrets better left buried.

Suzanne Leal has the gift of taking readers straight into the hearts of her characters and the stories they tell. She makes this achievement seem effortless. While The Deceptions moves between wartime Europe in the 1940s and Sydney in 2010, I never felt that jarring sensation that frequent time changes in a novel sometimes bring.

Hana Lederova, of a Jewish family living in Prague, is sent first to Theresienstadt, then Auschwitz, then forced to travel in crowded trains, to march day and night and do hard physical work while being starved and mistreated.

The story of five women, first grouped together in Auschwitz, and somehow sustaining each other from then on, is what moved me most in this novel. The women hold each other up, because those who fall in the snow during the long marches are shot. They share the workload when and how they can.

Hana is finally rescued at Belsen. Remarkably, she has managed to keep alive her unborn child.

In 2010, Tessa, a young woman living in Sydney and granddaughter of a former Czech guard at Theresienstadt, is caught up in an affair with a married man. Tessa’s grandparents are both in their eighties when her grandmother has to undergo emergency surgery. Before this, she tells a Uniting Church minister a secret she has carried with her since the war. The consequences of this secret play out through the remainder of the novel.

The Uniting Church minister is an intriguing minor character, as is Jonathan, whom Tessa eventually meets and marries.

In 2016, I reviewed Leal’s The Teachers Secret for the Fairfax newspapers.  When I looked at my review again, I was reminded of having made a similar comment, about Leal’s ability to take readers straight to the hearts of her characters. This is easy to say, but very hard to do successfully. I can thoroughly recommend The Deceptions, which was shortlisted for the 2021 Davitt Awards.