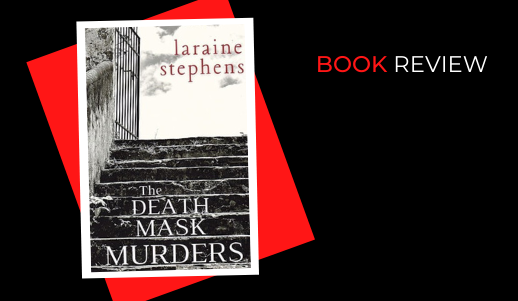 The story begins in beachside Brighton, Victoria in the last months of 1918. Emma Hart has lost her fiancé in the war and is contemplating her future as a companion to her wealthy aunt Florence when a sudden storm causes her to meet the mysterious Max Rushforth. They both take shelter in an abandoned mansion and stumble upon a set of sinister plaster death masks – the first clues in a murder mystery that will affect both their lives.

The title sparked my interest in this book as many years ago, I was curator at the Justice and Police Museum, Sydney, which had a collection of plaster death masks made from bushrangers and other criminals after they were hanged. Death masks were first made as a kind of memento mori to preserve the appearance of the deceased in the days before photography. Later they became an aid in a Victorian pseudo-scientific study of the brain called phrenology, which was particularly called upon to help identify criminal tendencies.

In Stephens’ story, at first the masks appear to relate to the family who lived in the abandoned house where they were found by Emma and Max, but later it is discovered that they are masks of women who have been murdered recently in the Brighton area.

When the masks disappear, suspicion falls upon Max. Emma is determined to help prove his innocence, and crime journalist Reggie da Costa is called in to help in the hunt for the real murderer.

This is the first novel in a series featuring Reggie da Costa. Reggie is brash, with chauvinistic views about women and overly confident of his own charms and abilities. As the story takes place in the last months of the war, he is unusual in that he has not enlisted to fight, has no desire to do so and doesn’t mind voicing his opinions about the war:

“I believe that the Australian public now sees the War for what it was: British capitalist interests defending their markets against the growth of Germany as a world power… The politicians misled people with their appeals to patriotism. Young men marched off to war, not knowing what they were fighting for.”

Surprisingly these views don’t lead to him being banished from Brighton’s fashionable society. Instead he cruises around in his smart motor car while trying to win Emma’s affections and writing about the murders for The Argus. However his divergence from the typical hero makes him an interesting character. I also enjoyed the strong partnership between Emma and Florence who do some detecting of their own.

The Death Mask Murders may appeal to readers of Caleb Carr’s The Alienist in some respects, as the plot involves insights into the beginnings of psychiatry. This is not a suspenseful page turner but neither is it a cosy mystery – its appeal lies in the characters, the historical setting and the exploration of the events which led to these sadistic crimes.