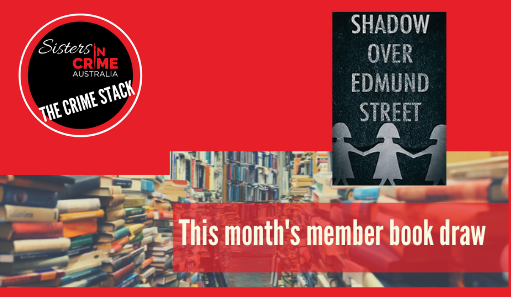 For the July Crime Stack, Journey To Words Publishing has kindly offered 20 copies of Shadow over Edmund Street, by Victorian Sisters in Crime member, Suzanne Frankham. This debut novel has just been shortlisted for ACWA’s 2022 Ned Kelly Awards.

Set in Auckland, Shadow Over Edmund Street is a thriller mystery that will keep you on your toes. Edwina’s death is brutal, with a silent killer who leaves no clues. Her murder seems unsolvable until a casual comment sends Inspector Alex Cameron and his seasoned team trawling through the dead woman’s childhood. Can Alex Cameron uncover the link in time to save the next victim? And preserve his own reputation?

Suzanne’s short stories have won prizes in the 2014 and 2017 Sisters in Crime’s Scarlet Stiletto Awards as well as the 2019 S. D. Harvey Award.

Naomi Lisa Shippen: “Suzanne Frankham’s debut novel is an absolute ripper. It kept me up at night and had me gasping as I read it on the train the next morning. It is addictive reading at its best and I look forward to reading more from this brilliant new storyteller.”

The Crime Stack is a benefit for Sisters in Crime members. Every month there are 20 books to win in a random draw of members.

Join now and be in the running for a complimentary paperback copy of Shadow over Edmund Street.