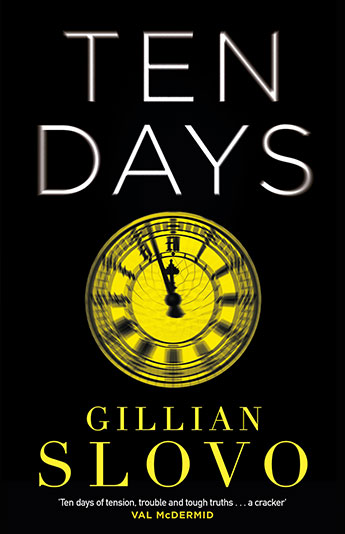 It’s 4am and Cathy Mason is watching dawn break over the Lovelace estate. By the end of the day, her community will be a crime scene. By the end of the week, her city will be on fire. A death at police hands has repercussions far beyond one family plunged into grief. When violence erupts in the middle of a stifling heat wave, the dead man becomes a useful tactic (or an urgent threat) in political games at the highest level. So while lives are at risk in Cathy Mason’s estate, across London in Westminster careers are being made or ruined.

Inspired by the 2011 riots in England this fast moving story takes place over ten days and examines the impact of events on several very different characters at the time and a year later. The riots start after a mentally ill but harmless resident of the council estate Lovelace – which is soon to be demolished – dies when he is taken into police custody. In a terrible heatwave, the estate erupts. Cathy Mason and her mixed race daughter are residents of the estate; ambitious politician, Home Secretary, Peter Whiteley, sees the events as an opportunity to displace his rival, the equally devious Prime Minister; while newly appointed Police Commissioner Joshua Yares (who appears to be a political appointee) is dealing with pressure from all sides. The police force itself is underfunded and the disadvantaged residents of the Lovelace estate lead miserable and frustrated lives. Some of them – Cathy’s occasional lover for example – are rather mysterious characters.

Telling the story from various personal perspectives gives this powerful story great suspense and pace. Very little mention is made directly of the class and racial tensions that also play a part in developments but they are clearly in the mix. All the characters are convincingly drawn and their various attributes – good and bad – are very believable. Via her characters, Slovo is quite scathing about the political machinations arising from the riots and the politicians involved emerge with very few redeeming features. The contrast with those suffering at the estate is stark. Even the weather with the stifling heatwave adds to the general misery.

Gillian Slovo is the daughter of South Africa’s apartheid fighter and communist party leader, Joe Slovo, and Ruth First, a journalist who was murdered for her anti-apartheid activism. Her understanding of both human suffering and political realities is entirely unsurprising. She has written other books and plays dealing with confronting social problems and she is very skilful at meshing the human and political as she has done in Ten Days. The writing is good and the threads of the story are neatly brought together at the end and some mysteries resolved. The story is a compelling picture of contemporary social concerns.