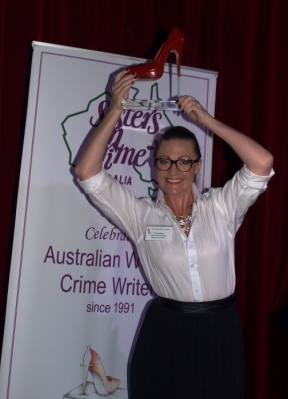 T.J. Hamilton, a cop-turned-crime writer from regional Queensland, has won the Every Cloud Productions First Prize ($1500) in Sisters in Crime Australia’s 22nd Scarlet Stiletto Awards for her short story “Hard Knox” about a woman who has apparently jumped from a high-rise housing commission block in Redfern.

Hamilton told the 110 strong crowd at a gala dinner at Melbourne’s Thornbury Theatre on Saturday night (28 November) that she had been fascinated with crime and crime writers for as long as she could remember, cutting her teeth on Inspector Gadget and Agatha Christie. She studied criminology and then joined the NSW police force where she served in Redfern.

These days she lives with her husband and children in Hervey Bay where she has been writing romance.

“The problem with me writing a romance is that my romance readers seems to get really upset with me, because not all of my characters survive … but the crime always get’s solved! So I thought I would dip my toe into crime writing and found this wonderful competition to enter,” she said.

She promises it won’t be the last we hear of her protagonist, Kaylee Knox. 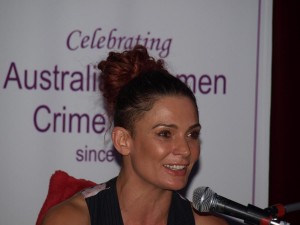 Danielle Cormack, star of Wentworth,presented the awards. Prior to the award presentations, Cormack discussed her ‘life in crime’ (and much more) with author, performer and Sisters in Crime member Jane Clifton, who appeared for four years in Prisoner, the show on which Wentworth is based. 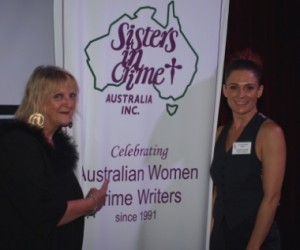 This year 191 stories competed for the Scarlet Stiletto Awards for a record $9,350 in prize money the coveted trophy for the overall winner. Twenty-six authors and 27 stories from across Australia were shortlisted for a total of 16 awards. Twenty shortlisted authors attended the awards ceremony. 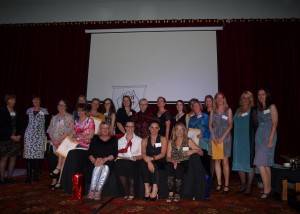 Kate Olivieri, a public servant from East Lismore ( NSW) win both Echo Publishing Second Prize ($1000) and the Liz Navratil Award for Best Story with a Disabled Protagonist ($400) for “Anna Parker: Here Comes the PI”, a story about a wedding organiser and private investigator.

The Athenaeum Library’s Body in the Library Prize ($1000) went to Jenny Spence (Balmain. NSW) for “Caught on Camera”. Spence has had numerous careers but recently has been writing fiction full-time. She published a thriller, No Safe Place, in 2013. Under the name Jennifer Walsh she has published three children’s books including The Tunnels of Tarcoola, which won a Sisters in Crime Davitt Award in 2013, followed by Crooked Leg Road.

The Athenaeum Library Body in the Library Award ($500 runner-up prize) went to Katie Mills (Doubleview, WA) for “To Drive Out Evil Spirits”. Mills, an academic librarian from Perth, also won The Scriptworks Great Film Idea Award ($200)for the same story.

The Kerry Greenwood Malice Domestic Award ($750) was won by Kath Harper, a retired teacher from Port Fairy (Vic) for “Hitting the Roof”, a story elderly woman who discovers her neighbour’s body in her backyard and sets out to prove that this was not the accidental death that it appears.

Thirteen-year old Amanda Coleman(Glen Iris, Vic)won theAllen & Unwin Young Writer’s Award ($500), open to writers 18 or under,for “Mental Blank”, the first story she has ever entered in a competition. Her ambition is to become an author when she leaves school.

The Arena Magazine for the Best Well-loaded Political Story ($500) was awarded went to Kylie Fox(Langwarrin, Vic) for “Guilt”. Kylie is a multiple-Stiletto-offender, having picked up a third prize and couple of category awards in previous years. She is the author of a comic fantasy and her first true crime book, Invisible Women, co-authored with Ruth Wykes, will be published in January.

The Financial Crime Award ($500), has been offered by Ann Byrne for the past three years but this is the only year it has been awarded. It went to Annie Hauxwell (Castlemaine, Vic) for “Washeteria”. The author of three books in the Catherine Berlin financial crime investigator series, Hauxwell has worked as a private investigator for more than twenty years. She came second to Cate Kennedy in the very first Scarlet Stiletto Awards in 1994.

National Co-convenor and the Scarlet Stiletto Awards wrangler, Michaela Lobb, said that the judges had been blown away by the quality of this year’s stories.

“Revenge was still a perennial theme but we did see for the first time several stories set in prisons and it was obvious our current political situation regarding detention centres had touched the heart of many writers,” she said.

The judges decided not to award the Josephine Pennicott Award for the Best Story by an Indigenous Writer.

Attached is the running sheet for the event which has blurbs and bios of all the finalists.