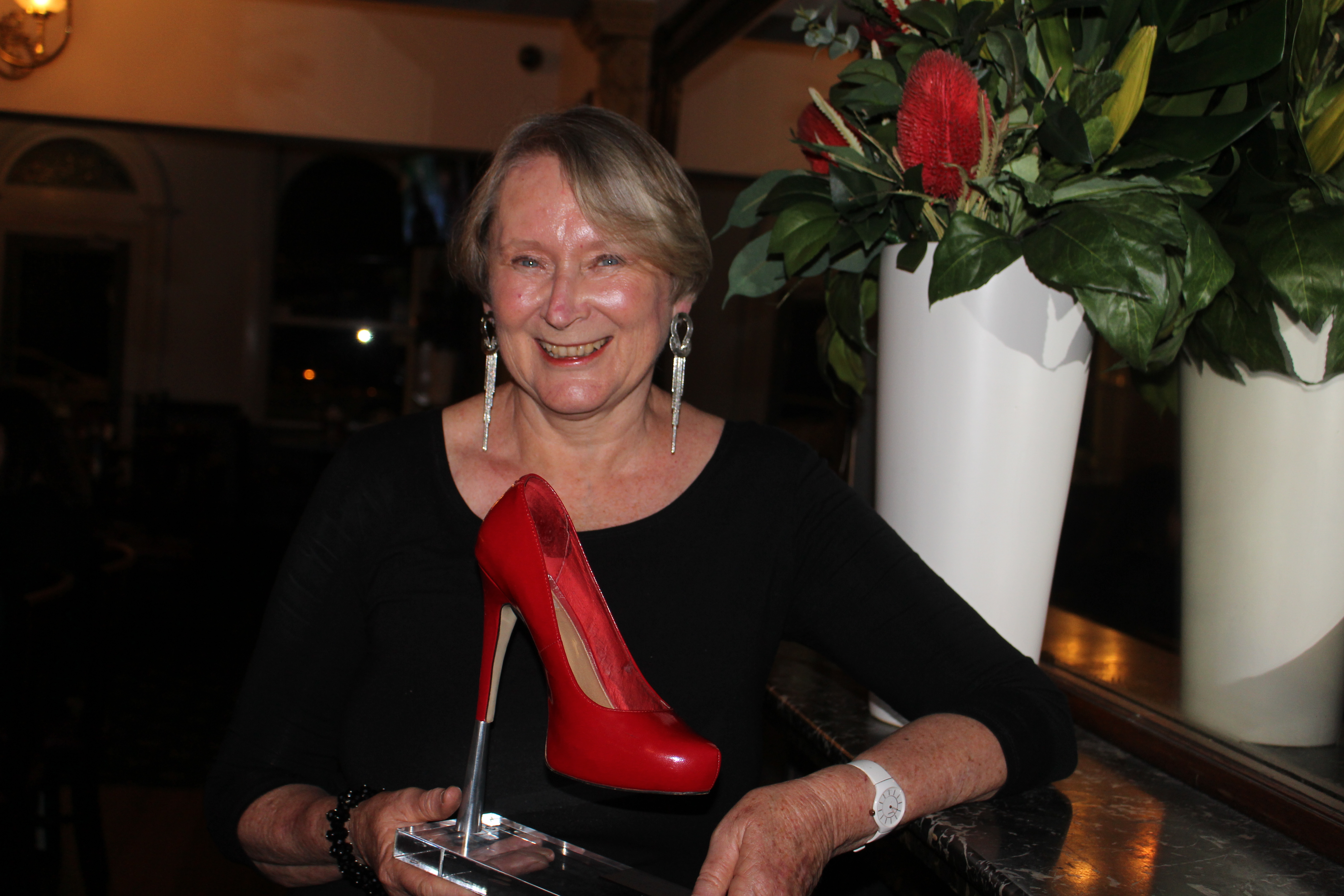 Harding-Smith was awarded The Bonnier Publishing First Prize ($1500) for “Locked In, Locked Out, Locked Up”, a story about the blindness that can occur in do 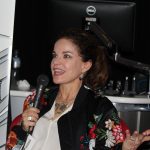 mestic violence. She was also presented with the coveted stiletto trophy, a scarlet stiletto shoe with a steel stiletto heel plunging into a mount.

It is Harding-Smith’s second tilt at the Scarlet Stiletto Awards. At the 2nd Scarlet Stiletto awards presented by Deborra-Lee Furness in 1995, her eight-year old daughter Carolyn won the Youth Award, then for writers 25 and under. Carolyn was awarded $100 for her heartfelt tale about an axe-murdering relief teacher. Rowena Harding-Smith was short-listed and received a certificate and t-shirt.

“I had hoped that one day I would match my daughter’s fame – and maybe now I have,” she said.

Harding-Smith’s short stories have been published in various magazines and literary journals since 1993, including Island, Mattoid, Famous Reporter, Horizons (UK). In the past twelve months she has garnered five awards plus publication for her short fiction. She has published two non-fiction books and many articles about memory and learning. 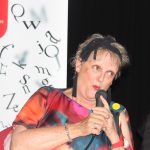 Prior to the awards presentation, Thornton engaged an hilarious conversation about her ‘life in crime’ (and much more) with Jane Clifton (left), actor, musician, crime author and marriage celebrant. The two go back to the days of Prisoner and the campaign to save the North Melbourne public swimming pool. In the late seventies, Clifton fronted a band called Stiletto, one of the many reasons that Sisters in Crime claimed made her an obvious choice to compere the event.

This year 186 stories competed for the Scarlet Stiletto Awards for $8,600 in prize money plus the scarlet stiletto trophy. Twenty-four authors were shortlisted for a total of 13 awards. Twenty shortlisted authors attended the awards ceremony.

Community worker Lucy Kiff (pseudonym) (East Brunswick, Vic) won both the Simon & Schuster Second Prize ($1000) and the Scriptworks Great Film Idea Award ($200) for “Rules to Live By”. Kiff’s short fiction has been published in the United States and Australia and she is a graduate of RMIT’s Diploma in Professional Writing and Editing. After writing her first YA crime adult novel, she is now working on her second. (Kiff was unable to attend.)

The Sun Bookshop Third Prize ($500) went to Katie Mills (Doubleview, WA) for “Special Consideration”. Mills is an academic librarian and her short stories were awarded prizes at the 2014, 2015 and 2016 Scarlet Stiletto Awards. She also won 2016 Harri Jones Memorial Prize, a division in the Newcastle Poetry Prize for a poet under 35 years of age.  (Mills was unable to attend.) 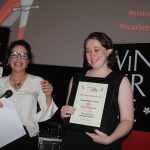 Ellen Vickerman (Carindale, Qld) won the Young Writer’s Award for the second year running. Her story, “The Last Great Australian Summer”, follows two young filmmakers as they return to the town they grew up in to produce a documentary about the beach’s famous mystery: the disappearance of two ten-year-old twins.

Vickerman is currently studying a degree in Creative & Professional Writing at QUT. Currently, she is predominantly a short story writer, and most known for winning the 2017 Sydney Writers’ Room Award and the Somerset National Novella Competition, among others. This is the third year running that she has won an award in Scarlet Stiletto Awards, which she says has inspired her to begin work on a crime novel. 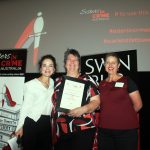 The Athenaeum Library’s Body in the Library Prize ($1000) was won by Narrelle M Harris (Melbourne, Vic) for “Jane”. Harris writes crime, horror, fantasy, romance and erotica. Her 30+ novels and short stories have been published in Australia, US and UK Award nominations include Fly by Night (nominated for a Ned Kelly Award), Witch Honour and Witch Faith (both short-listed for the George Turner Prize) and Walking Shadows (nominated for the Chronos Awards and shortlisted for the Davitt Awards for crime writing). 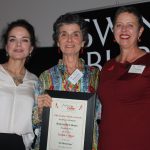 The Athenaeum Library Body in the Library Award ($500 runner-up prize) went Natalie Conyer (Mosman, NSW) for “In Memoriam”. Conyer describes herself as a late-onset writer scrambling to make up for lost time. She’s read and loved crime fiction all her life, so much so she’s now doing a doctorate on it, hoping to finish before she loses her marbles completely. She is a serial offender in the Scarlet Stiletto Awards. She won 3rd prize in 2015 and the overall Body in the Library Award in 2014. 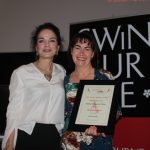 The popular Kerry Greenwood Malice Domestic Award ($750) was won by Ballarat media and communications worker Maryanne Ross (Vic) for “Follow Suit”. Her story involves an older woman Nina Libkovich who, upholstered in vintage fashion and powered by Polish proverbs, cuts a stylish swathe through St Kilda to solve a murder at the notorious boarding house, The Pickwick.

Ross won the 2016 New England Thunderbolt Prize for crime writing for her short story “Secrets”, which was also selected for the 2017 Award Winning Australian Writing anthology. She has a Science degree in Horticulture and studied Professional Writing and Editing at RMIT. 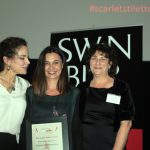 The Every Cloud Productions Mystery with History Award ($750) was awarded to M J Tjia (Greenslopes, Qld) for “Deathly Pallor”, a story set in Victorian England and featuring the same courtesan sleuth, Heloise Chancey, as her recently released debut novel, She be Damned (Legend Press, UK; Pantera Press, Australia). Her novella, The Fish Girl, won this year’s Seizure’s Viva la Novella. She has also been longlisted for the CWA (UK) dagger awards. Her work has appeared in Best Australian Stories, Review of Australian Fiction, Rex, Peril and Shibboleth and Other Stories. Mirandi has a PhD in Creative Writing and Literary Studies (QUT). 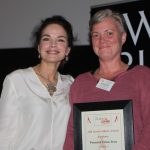 The Financial Crime Award ($500) was won by Rachel Smith (Mt Martha, Vic) for “A Gift of Thoth”. A public servant, Smith writes poetry and is currently working on a crime fiction novel.

When not pounding the city pavements or holidaying at the beach, she’s holed up in the hills of Warrandyte, Victoria and finds inspiration by allowing a suspicious mind to roam over art, landscapes, people, the quirky and unusual. 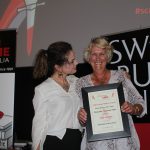 Julie Alavoine (Mt Eagle, NSW) took out the Harper Collins Romantic Suspense Award ($500) for “The Body in the Library“. Alavoine is 70 and loving it. She married her 3rd husband 3 years ago, has 3 children, 10 grandchildren and 5 great-grandchildren. She has been writing stories since about 35 and then off and on over the years when she had the time. Two years ago, she joined the local writers group in Young and found renewed enthusiasm to write and started entering short story competitions. 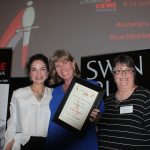 The Clan Destine Press Award for Cross Genre ($500) was won by Christine Tondorf (Alstonville, NSW) for “My Post Truth World”. The story involves a TV journalist who is exiled to the country and has a car accident. Tondorf herself was in a car accident in the heavy rain en route to the ceremony and was lucky not to be injured. Tondorf has worked as a journalist for 25 years in print, radio and television. Her stories have appeared in The Australian and Sydney Morning Herald and on the Seven Network, SBS and the ABC. She developed an interest in ‘Australian Coastal Gothic’ after reporting on 11 deaths in two years, and completed a master’s thesis on the subject this year. 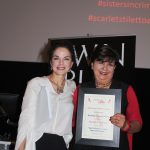 The Liz Navratil Award for Best Story with a Disabled Protagonist ($400), offered by the Queensland Chapter of Sisters in Crime in honour of the late Liz Navratil, a member with disabilities, went to Suzanne Frankham (Brighton, Vic) for “The Mt Fairview Ladies Outreach Program”. With a background in science, Frankham has spent most of her life constrained by technical jargon and has found the transition to writing fiction liberating. After her first short story success in the 2014 Scarlet Stiletto Awards, there have been several others, but for Suzanne, there’s nothing quite as exciting as sitting hunched over her computer, planning a murder (or two) for the Scarlet Stilettos. 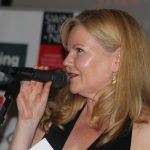 Judges’ wrangler, Michaela Lobb, reported that the big change this year was the relative absence of women are no longer murdering their husbands for no particularly compelling reason. “Every year we used to be confronted with a swag of stories where the wife had suddenly had enough – her husband had put his mug on the kitchen bench instead of the dishwasher so it out to the backyard to pick some oleander leaves. But given the themes of domestic violence in many of this year’s stories, maybe women should be reaching more often for their kitchen scissors and gathering those leaves.,” she said.

“What hasn’t changed this year is the impressive standard of the Youth entries. There may not be a lot of them but the quality is sky-high. The future of Australian women’s crime writing is in good hands.”

Scarlet Stiletto: The Ninth Cut (ed. Phyllis King), a collection of the 2017 winning stories, is available from Clan Destine Press as an e-book for $4.95 https://www.clandestinepress.com.au/ebook/scarlet-stiletto 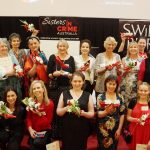 Swinburne University of Technology helped sponsor the event itself.