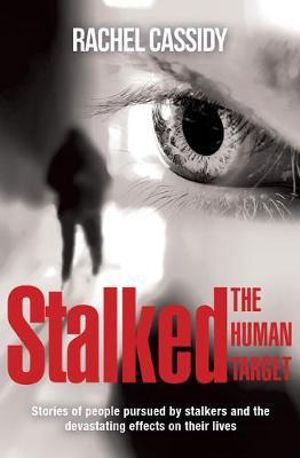 Stalked: The Human Target is a detailed account of the effects of stalking, which is experienced by a shockingly high proportion of the population. Celebrities like David Letterman and Madonna are the highest profile targets of stalkers, but ordinary people are also targeted, harassed and bullied.

Rachel Cassidy, herself the target of a stalker, tells the stories of people who have been pursued by stalkers and the devastating effects that has had on their lives. Sometimes the stalker’s behaviour becomes violent. Dancing with the Stars judge Mark Wilson had two dancing schools burned to the ground and his career destroyed. The man who stalked Jodie Foster attempted to assassinate President Reagan to gain her attention.

Stalked is a perceptive analysis of stalking from the inside – told by the targets, the stalkers, and the experts who deal with the havoc wreaked by the people who harass or persecute others with unwanted and obsessive attention.

Stalked: The Human Target: Stories of people pursued by stalkers and the devastating effects on their lives by Rachel Cassidy is a much-needed guide to stalking behaviour, and its consequences. In the same way that Working with Monster by John Clarke, gave reassurance to those who have experienced the horror of working with an office bully, Stalked: The Human Target provides solace to those who find themselves caught in such a situation

The first part of the text examines the nature of stalking, including the current definitions and the most commonly occurring styles, or types, of stalking behaviour. This section includes an interesting comparison between bullying and stalking, and how they are not mutually exclusive.

The second section offers the reader a number of accounts from those who have been stalked. The former victims range from the young, celebrities to ordinary Australians. Their tales are harrowing, disturbing and confronting. In most cases, they had to go to drastic lengths to disentangle their lives from their pursuer. It’s an unsettling but important read.

The third section of the book provides practical advice to those who may be the target of a stalker, or are experiencing threats to their personal safety. There are many practical recommendations, which would be of benefit to anyone who regularly uses social media or who has some form of public presence.

One of the most interesting inclusions of the book appears in the first appendix. Cassidy interviews a former stalker about his motivations for stalking and his related crimes. It offers a disturbing insight into the thought processes of these individuals and leaves the reader concerned as to the success of the rehabilitation of the interviewee.

Cassidy has thoroughly researched, and consulted widely with forensic psychologists, lawyers, and victims, in her preparation of this book. It is well set out, clear and concise, and accessible to a wide audience. It would make an excellent resource for social welfare organisations, student of psychology, law, and criminology, and those in law enforcement.