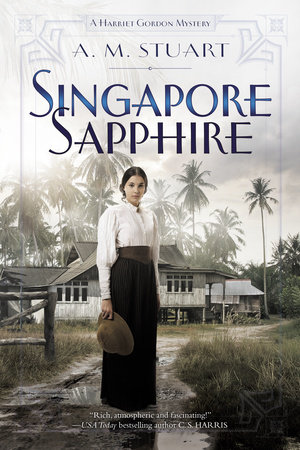 Early twentieth-century Singapore is a place where a person can disappear, and Harriet Gordon hopes to make a new life for herself there, leaving her tragic memories behind her–but murder gets in the way.

Singapore, 1910–Desperate for a fresh start, Harriet Gordon finds herself living with her brother, a reverend and headmaster of a school for boys, in Singapore at the height of colonial rule. Hoping to gain some financial independence, she advertises her services as a personal secretary. It is unfortunate that she should discover her first client, Sir Oswald Newbold–explorer, mine magnate and president of the exclusive Explorers and Geographers Club–dead with a knife in his throat.

(Note: this review is based on an uncorrected Advance Reading Copy)

You have to admire a crime book that delivers a bloody double murder in its first chapter. A brief prologue, introducing protagonist Harriet Gordon, precedes it and established Harriet as a proper Edwardian lady seeking employment as a stenographer, and her soon-to-be-late employer.

Singapore Sapphire has many good things going for it: a great setting in the Singapore of 1910; Harriet, the sister to the local reverend/boys school headmaster and woman with a hidden past which makes her dislike policemen; Inspector Robert Curran, the subject of her initial suspicion as he investigates the brutal murder.

The story unfolds in a combination of fresh perspectives – mainly coming from Harriet – and a certain skirting-on-the-clichéd spirit of crime fiction. It’s both charming and slightly exasperating how it draws on traditions of Christie, Holmes, 19th century adventure stories and even a touch of Wodehouse.

Some overused turns of phrase aside, the story clicks along at a good pace, bringing on a gallery of suspects, a new gruesome murder and the inevitable tumble that Harriet takes into acute danger.

Harriet is easily the best drawn of the characters, her troubled history revealed over time. The other leading characters, of English and Dutch backgrounds, make up the rest of the cast of suspects, victims and investigators and have varying degrees of texture and dept. Unfortunately, the non-European characters – various servants, low ranking police and Curran’s Chinese lover, Li An – are thinly drawn. Li An, whose tragic past is hinted at but not explained, is particularly disappointing, her personality mostly ‘exotic, tragic woman with nice hair’.

The addition of ‘A Harriet Gordon Mystery’ to the title indicates more to come, so I hope that Li An and other supporting non-white characters will become fully realised people in future stories, rather than oversimplified archetypes who exist primarily to populate the background, be superstitious and make tea.

For all that, Singapore Sapphire is a well-paced and entertaining murder mystery with a great setting and engaging lead characters.