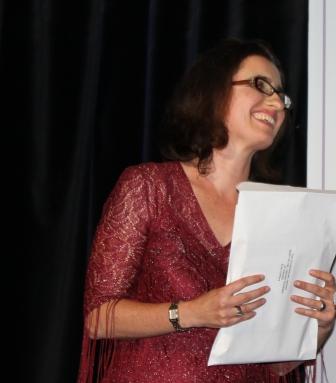 Congratulations to Scarlet Stiletto winner Aoife Clifford (above at the 2013 Awards’ ceremony) has her debut novel coming out next year with Simon & Schuster in Australia and then in the UK.

Aoife won the top Scarlet Stiletto Award in 2007, came second in 2009 and has won numerous other category awards.

She also won the Ned Kelly – S.D. Harvey Award in 2012. She was shortlisted for the UK Crime Writers Association Debut Dagger in 2009. Her short stories have been published in the crime anthology Scarlet Stiletto: The Second Cut (2011) and in the Sydney Morning Herald and the Scribe anthology, New Australian Stories.

The novel tells the story of Penelope Sheppard, whose young life is weighed down with scandal and tragedy.  But entry into university offers her the chance to run away from the past and reinvent herself among perfect strangers. Little by little, through Pen’s flawed narration and tantalising diary entries, her secrets and lies come to light and a dangerous dilemma unfolds, twisting and turning until the very last page.

All These Perfect Strangersis Aoife Clifford’s first novel, but she has already won the two major Australian crime writing prizes in short story form: the Ned Kelly – SD Harvey Short Story Award and the Scarlet Stiletto. She was also shortlisted for the UK Crime Writers Association Debut Dagger. In 2013, she was awarded an Australian Society of Author’s mentorship for All These Perfect Strangers.

Carla Josephson said, ‘I am absolutely thrilled to be publishing All These Perfect Strangers. I received it on a Friday and read it in one satisfying gulp, barely coming upfor air. Pen is a brilliantly unreliable narrator who pulls the reader into her world wherethe truth is constantly being revised and no one is who they seem. This is a unique and beautifully written debut and I’m delighted to welcome Aoife to S&S.’

Larissa Edwards, Head of Publishing at S&S Australia, said, ‘I am so proud to be publishing All These Perfect Strangers on our list. Aoife is a wonderful and talented writer whose novel haunted me for days after the first reading. It is hard to believe this is a debut when you are drawn into the mystery and intrigue of this self-assured novel. This is certain to gain a wide readership amongst Australian readers.’

Aoife Clifford said, ‘It is a dream come true to have my debut novel picked up by Simon & Schuster and to work with their passionate and dedicated editors, both in Australia and the United Kingdom. I wanted this novel to be a compulsive page-turner that would keep the reader up all night but have the emotional depth that they would still be thinking about it long after finishing. I am delighted that my character Pen and her story has found such a wonderful audience.’

Clare Forster (Curtis Brown Australia) and Rebecca Ritchie (Curtis Brown London) said, ‘All These Perfect Strangers is an incredibly accomplished debut, packed with twists, turns and secrets. We are delighted that Simon & Schuster will be publishing Aoife Clifford in the UK and Australia and think this deal spells the start of a very bright future.’