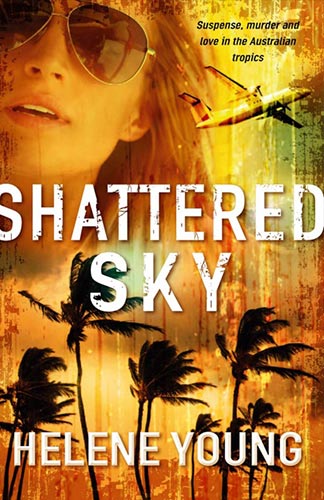 Author: Helene Young
Publisher: Hachette Australia
Copyright Year: 2011
ISBN: ISBN: 9780733624919
No of Pages: 342
Review By: Sharon Halasz
Book Synopsis: A fast-paced and enjoyable read, SHATTERED SKY is Helene Young’s second novel set in the surveillance world of the Border Watch pilots. In the first novel, Wings of Fear (formerly titled Border Watch), co-pilot Lauren survived a missile strike mid-air only to lose a close friend at the hands of terrorists. A year later, Lauren has been promoted to captain and this is her story. Several characters appear in both books. You could read this novel as a standalone, but I love reading a series to see how characters grow. Former party girl Lauren’s determination to save the smuggled women proves she is definitely worthy of her own book.

Author – and pilot – Helene Young uses her knowledge of flying to great advantage. The view from the cockpit is very real, if scary at times. Nervous fliers might prefer to save this book for reading on the ground rather than in a small plane. I’d like to read it on a long flight to Cairns so I could wander around the tropical setting that Helene brings to life.

Lovely to see a strong female character taking charge in an unusual workplace. Lauren struggles with grief and blames herself for her friend’s death, but is trying to rebuild her life by concentrating on her career. There’s plenty of action along the way with some sneaky plot twists and evil villains.

Yes, there’s a dash of romance too. After a rocky beginning and the occasional gunshot, Callam Granger joins Lauren’s search for the smuggled women. If only he could catch up with her in time…

I highly recommend Shattered Sky to crime fiction fans and romance readers. If you love romantic suspense set in Australia, you’ve probably already read it. Am I right? I hope this is not the last we’ll see of the Border Watch team.