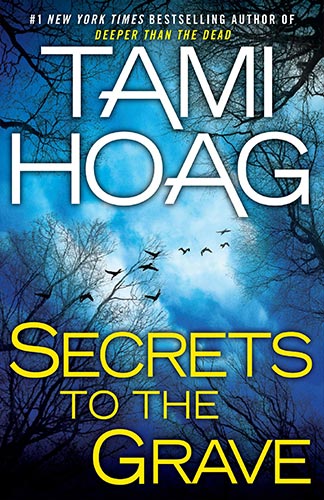 Secrets to the Grave is a solid, well-crafted tale of murder, secrets, and the lengths to which people will go to hide them.

The mystery Hoag presents is intriguing – a single mother who may not be who everyone thinks she is, many plausible suspects, and a plot that kept me guessing the killer’s identity until (nearly) the very end. But this book is much more than just a cleverly constructed “whodunit”. Hoag has woven an exceptional level of emotional and psychological depth into her characters’ stories, and as the mystery unfolds she also presents us with several realistic and poignant vignettes: the pain and sorrow of an imploding marriage; a young boy’s tragic descent into juvenile delinquency; and how we all have our wounds and secrets – the only difference being how far each of us will go to protect them. Hoag has cleverly employed a light touch with these sketches, using them to enrich her story without detracting from the main plot.

Another fresh aspect of this police procedural is its setting – 1986, before the advent of mobile phones and DNA technology, and before child psychology quite got off the ground. As such, we get to see a crime solved through good old-fashioned policing; leg work, deduction, and the pushing of the right psychological buttons until a suspect cracks.

Hoag skillfully manages a large number of point-of-view characters without confusion or diluting the strength of the mystery. In fact, many of her minor characters obviously have full backstories just waiting to be unearthed, particularly Anne’s best friend, the hilarious, acid-tongued Franny, who, along with the realistic, black-humoured banter of the police, provides light relief in the book’s grimmer moments.

Secrets to the Graveis the sequel to Hoag’s 2009 release, Deeper Than Dead, and while I imagine my reading experience would have been enhanced had I first read the earlier book, I found Hoag’s subtle incorporation of backstory meant there was never any loss of clarity, nor any sense of something lacking.

With loads of twists and turns to keep readers on the edge of their seats, Secrets to the Grave is a thoroughly enjoyable and absorbing read. It’s my first Tami Hoag book, and it certainly won’t be my last.