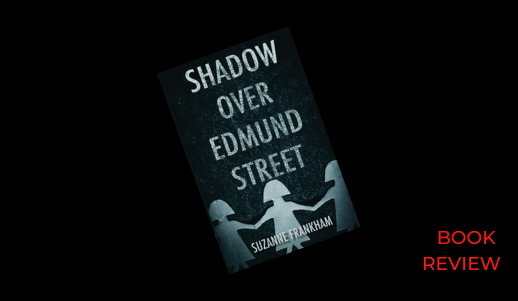 Crafting a fine short story is a skill perhaps more closely akin to poetry writing than novel writing. However, success in short fiction can be a predictor of quality book-length work, and I’m happy to report this is the case with Suzanne Frankham’s developing career as an author following her first career in science.

After two wins in Sisters in Crime Australia’s Scarlet Stiletto Awards (in 2014 and 2017) and a win in the S.D. Harvey Short Crime Story Award (2019), Frankham has published a strong debut novel, a police procedural that looks set to be the opener in a series featuring Auckland detective Alex Cameron.

Like so many crime stories, Shadow Over Edmund Street begins early one morning with police receiving the information that a dog walker has found a woman’s body and the death looks suspicious. After depositing his own dog in the care of his elderly and helpful neighbour, Alex drives to the scene, the harbourfront of an expensive suburb. His team members, Jerry and Marion, arrive soon after, followed by a pathologist and a forensics team. The victim, who has been strangled, is quickly identified as Edwina Briggs, born 1965, resident of a less affluent suburb, Ponsonby, and night-shift employee of a pathology lab.

In the hands of a poor wordsmith this opening sequence would be ho-hum, but Frankham writes good clean prose that moves fluently, drawing the reader into the early stages of a contemporary murder investigation. She uses dialogue judiciously, differentiates characters with descriptive details, and conveys a sense of place. All this is fortunate, because – as characters repeatedly remark – the victim lived an extremely quiet and limited life and it’s a real puzzle why anyone would have wanted to kill her.

Edwina’s death is brutal, a swift and silent killer who leaves no clues. Her murder seems unsolvable until a casual comment sends Inspector Alex Cameron and his team trawling back through time. Can they find the link in time to save the next victim? And preserve his own reputation?