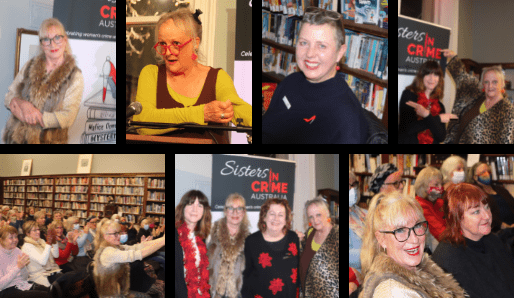 The Scarlet Stiletto Short Story Competition was officially launched at the Melbourne Athenaeum Library, Collins Street, Melbourne on Friday 9 July 2021. It was wonderful to see such a strong turnout and a fine time was had by all.

Blanche Clark was the MC and stories were read by Jane Clifton and Susanna Lobez. The stories were edited version of recent Body in the Library winning entries from Fin J Ross and Blanche Clark. Of course, the readings were accompanied by drinks and snacks and chat. It was great to be back to live events again!

Carmel Shute, Sisters in Crime Founder and Secretary, and James from the Melbourne Athenaeum were on hand with their cameras to record the event. Check out the photos here.