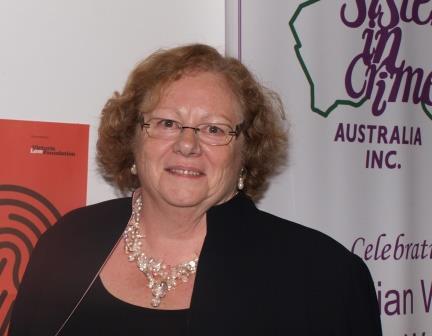 Long-time Sisters in Crime member and convenor, Sandra Nicholson, was endorsed at Sisters in Crime’s annual planning day on 4 February to replace Vivienne Colmer as President. Vivienne died of cancer on 16 January after being elected President in October.

Sandra says, “I want to lead Sisters in Crime adhering to the same values that  were so important to Vivienne: respect, professionalism and bravery.”

Sandra, who joined Sisters in Crime in 2000, began her career with Victoria Police in 1975 and she worked in most aspects of policing, including general duties, criminal investigations, Freedom of Information, police training and task force policing, serving both metropolitan and rural areas.

Sandra expects good behaviour from all Sisters (and ‘Brothers-in-Law’ ) – otherwise it will be a case of “Go directly to Jail. Do not pass Go. Do not collect $200.”

After retiring in 2010, Sandra fulfilled a life-long dream by completing a Summer School in Creative Writing at Oxford University as part of her five-month jaunt in Europe. She is a huge fan of crime fiction but not of true crime. “I had enough of that when I was working,” she says.