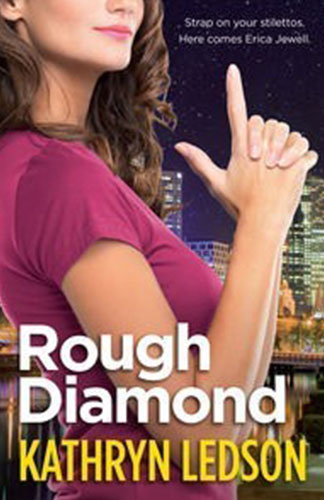 Author: Kathyrn Ledson
Publisher: Penguin
Copyright Year: 2013
Review By: Sandra Nicholson
Book Synopsis:
The shock ending to Erica Jewell’s marriage left a huge hole in her bank balance and a bigger one in her heart. And now her life goals make a very short list: no surprises, no debt and, definitely, no men. That is, until she finds one bleeding to death in her Melbourne garden one stormy Friday night.
Jack Jones is a man whose emotional wounds are more life-threatening than the bullet in his shoulder. Under orders, he recruits Erica to his secret team of vigilantes, and Erica suspects her safe, predictable world is about to be turned upside down.
And she’s absolutely right.

Erica Jewell is grieving the breakdown of her marriage – Danny left with a ‘blond bimbo’ in a sports car, Erica’s savings and left her with a house in need of urgent attention. Erica works in PR with a boss, Rosalind, who is the ‘bitch from hell’ but is supported unconditionally by her best friend Lucy and Lucy’s fiancé, Steve.
Erica arrives home from work one stormy Friday night, wet through, and desperately needing a quiet, ‘alone’ night, and finds a man, Jack Jones, lying injured and bleeding in her garden. He has been shot and in her opinion is near death but he begs her not to call the police or a doctor and tells her it is a matter of National Security. With difficulty she gets him inside and calls Lucy for help.
Jack heads up a group of vigilantes determined to protect Australia from imminent terrorist attack. Naturally there are bodies, explosions, blood, guns etc and Erica is recruited by Jack to help bring down a terrorist group fashioning bombs from stolen fertiliser – stolen from Erica’s employer.
Although Danny (ex-husband) keeps turning up like a bad penny at the most inopportune times, Erica’s life is changed forever (and for the better in my humble opinion) by the appearance of Jack and as Danny, and their marriage, fade into the background, the very sexy Jack brings adventures Erica didn’t think possible, danger she had never encountered before and lots of money.
I loved this book and as soon as I finished I checked to see when the next one in the series was due for publication. It is funny, sexy, fast paced and a great read. It has been likened to Janet Evanovich’s Stephanie Plum series and in some respects it is but I thought it was better.