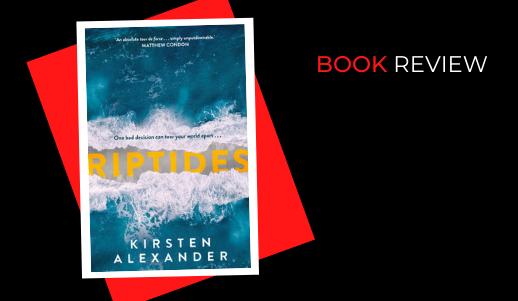 One bad decision can tear your world apart . . .

December 1974. Abby Campbell and her brother Charlie are driving to their father’s farm on a dark country road when they swerve into the path of another car, forcing it into a tree. The pregnant driver is killed instantly.

In the heat of the moment, Abby and Charlie make a fateful decision. They flee, hoping heavy rain will erase the fact they were there. They both have too much to lose.

But they have no idea who they’ve just killed or how many lives will be affected by her death. Soon the truth is like a riptide they can’t escape, as their terrible secret pulls them down deeper by the day.

This is the dramatic beginning of Riptides. The unfolding story, set in Brisbane in the mid 1970s, is a story of their fear, guilt and attempts to evade detection. The narrative is told in turns by the sister, Abby, and the brother, Charlie, each section in the first person. Abby is older, has three children and is married to a journalist. Charlie has just returned from Bali and is longing to get back there.

There are several important co-incidences in this novel, the first being that the dead woman was going to marry Abby and Charlie’s father, and was pregnant with his child. The siblings had no idea of their father’s intended marriage, but instead of this information becoming a spur to tell the truth, they go on hiding it. Through successive rounds of police questioning, the siblings’ story of what they did on the night of the crash becomes less and less credible. Further on in the novel, it becomes apparent that the police are divided over how to proceed, the senior man having an agenda of his own.

The main focus of Riptides is on the siblings’ see-sawing emotions, as continuing deception becomes less and less of an option for them. Both have forfeited any claim to be the novel’s moral centre. John, their father, is a good man, but lost in grief and, for the most part, without the will to act.

I found Kirsten Alexander’s prose glib and superficial at times when, in my view, a more searching, probing narrative approach was called for. I felt the siblings never really faced up to the enormity of what they’d done. That said, I did develop some sympathy for Abby, who is caught between her brother, her father and husband. For Charlie, who seems incapable of understanding much – Abby’s husband calls him mentally a child – I felt no sympathy at all.

Riptides is Kirsten Alexander’s second published novel. The first was Half Moon Lake. Riptides is an ambitious work, setting out, as it does, across uncharted moral ground. It is built on an act of cruelty which was very hard for me, as a reader, to understand, let alone accept. But its flaws are interesting and I expect that the novel will certainly stay with me.