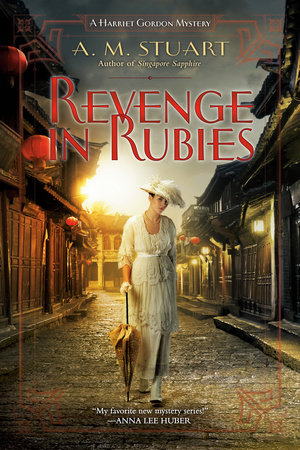 The name A. M. Stuart isn’t known to many readers of historical crime fiction, but this is an author who arrives with a string of historical romance and mystery titles that began in the early 1990s and have been published under the name Alison Stuart.

The opening two books in Stuart’s new Harriet Gordon Mystery series, set sequentially in Singapore in 1910, offer ample substance. What they lack in amusing lightness of touch by contrast with, say, Kerry Greenwood’s fictions they make up for in soundness of plotting and characterisation.

Stuart’s protagonist, introduced in Singapore Sapphire, is a likably staunch woman who lives with her bachelor brother, Headmaster of a Church of England boys’ prep school. Needing to support herself, Harriet takes typing jobs, and by the time Revenge in Rubies opens she is working part-time for the Detective Branch of the Straits Settlement police force. There she’s answerable to the admirable Inspector Robert Curran and is quickly developing into an invaluable offsider in his criminal investigations.

Socially Harriet mixes with the English-speaking upper echelon and mostly sees things from that vantage point. However, she is beginning to make friendships with non-European characters, most notably Curran’s common-law wife Khoo Li An.

As a survivor of force feeding when imprisoned for suffrage activity in London, an experience which prompted her exit from Britain, Harriet has some empathy with progressives. And as a widow who lost her husband and young son to typhus in India, she knows grief and loneliness.

Singapore’s strategic location for trade is brought out in the plot of the first novel, which features the smuggling of gemstones from Burma by expatriate English and Dutch conspirators. The second book, which is more tightly plotted and winds up more briskly, focuses on Singapore’s military community.

In Agatha Christie fashion, the plot of Revenge in Rubies turns on secretive doings, current and in the recent past, to do with desire, marriage, status, and money. The regimental context is strongly rendered thanks to Stuart’s past as an army officer and her family’s experience of the British military in Singapore and Malaya. There are occasional anachronisms, for instance a reference to testosterone.