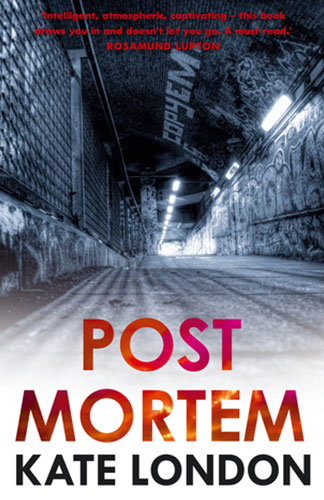 Author: Kate London
Publisher: Corvus Paperback
Copyright Year: 2015
Review By: Anne Bruist
Book Synopsis:
She closed her eyes and saw, as if on a loop, a repeating backdrop of square windows, blue concrete spinning and passing, passing, passing. She could not escape the horror of it: unstoppably, irretrievably until the hard concrete reaches up.

A long-serving beat cop in the Met and a teenage girl fall to their deaths from a tower block in London’s East End. Left alive on the roof are a five year old boy and rookie police officer Lizzie Griffiths. Within hours, Lizzie Griffiths has disappeared, and DPS officer Sarah Collins sets out to uncover the truth around the grisly deaths, in an investigation which takes her into the dark heart of policing in London. Grounded in the terrifying realities of life on the force in city where the affluent middle-classes live cheek-by-jowl with the poorest immigrants, this is a complex, intelligent, thrilling crime novel by an author who has walked the beat.

This is a debut novel from an ex-cop (British). The story follows a tragedy—a young girl and a male cop go off the roof of a high rise and die. A young (female) cop (Lizzie) arrives and saves the young boy also there—and then goes on the run. We follow her, and the two detectives (Sarah Collins, Steve Bradshaw) assigned to find her and work out just what happened. We get enough about the young women’s background and her involvement with the police earlier, and just enough socio-cultural-racial issues to make you feel uneasy—and think, feel, and wonder. About our own reactions and prejudices.

First off—this is fresh. Different. Original, albeit within a familiar British police framework. And it reeks of authenticity (I thought this before I read she had worked in the police force). It is well written, a page turner, and more than anything else it was winner for me because it tackled big issues. No one ever said a crime novel can’t do this—in fact Ruth Rendell rather implied it should. So this ticks everything—a great story, complex characters that are believable, complex motivations, and an undercurrent of ethics, choices and the things that make me glue myself to the pages—and remember them long after the last word is read.

This is a crime writer to watch—and keep reading.