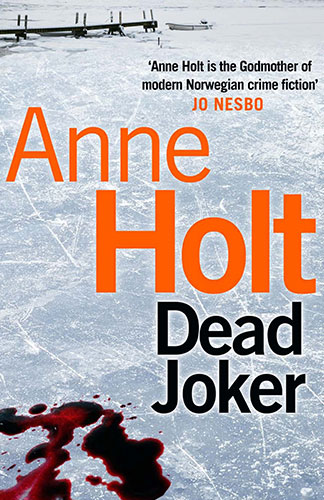 Book Synopsis:
Chief Prosecutor Sigurd Halvorsrud’s wife is found dead in front of the fireplace in the family living room. The cause of death is instantly apparent – she has been brutally decapitated. Halvorsrud immediately falls under suspicion. Then a journalist at one of Oslo’s largest newspapers is found beheaded. What links these two horrifically violent crimes? Detective Inspector Hanne Wilhelmsen is called in to lead the investigation with her old colleague Billy T. But the most demanding task that Hanne Wilhelmsen has ever faced in her career clashes with the worst crisis in her personal life. Cecilie, the woman she lived with for almost twenty years, is seriously ill. Wilhelmsen must ask herself: is the truth worth chasing at all costs?

This is the fifth in the Hanne Wilhelmen series, set in Oslo, only just translated into English though published in 1999. It was the 8th in the series, 1222, that was first translated and the one that made her a best seller in English; the publisher then went back to the first and has been drip feeding us with those that bring us up to 1222. As someone who usually likes to start and the beginning and work through a series chronologically, I’ve found this an interesting way to do it—in the 8th Hanne’s life circumstances are significantly different—I read each one now to find out when and what happens to the overall picture, quite aside from the tension in the novel itself! This one brings drama and alteration to her private life but the big ‘thing’ (sorry but don’t want to do a spoiler if you intend to do this chronologically) must be in book 6 or 7.

Hanne is a Chief Inspector with the Oslo police—smart, a loner, introverted and emotionally limited, attractive late 30-40ish, in a long term gay relationship with Cecilie, and a long term police partner Billie T. This plot puts the public prosecutor in custody when his wife is beheaded—he claims someone he previously prosecuted did it, but a witness says this man suicided days earlier. We wait for the body to turn up as the plot throws a mix of apparently unrelated people and stories at us; a journalist with a shady past being warned off, a writer who cuts off his ears at 13 and may be a conspiracy theorist, the prosecutor’s mentally ill daughter and the owner of the suicidal man’s apartment. This makes what at the end is reasonably straightforward, a deliciously complex tale. Well written, good pacing and I was up late to finish it, despite too many Christmas cocktails. The characters are all interesting but Holt never spoons feeds us—they do surprising things and we have to put the pieces together rather than every emotion and motivation explained at length. It makes for intelligent writing and reading, though the names add extra complexity: Evald and Eivind took a while to cement themselves as which was which (a book rather than a kindle helps here) and the occasional re-emergence of small characters like Preben meant I had to pause to remember where they fitted. Not being able to automatically work out if they were male or female didn’t help.

I have read three of the first four (and the 8th) in the series—this writing is self-assured and consistent from start to finish of the series. Holt shows us Norway in a way that the tourism board might not be rapt with, but is the stuff crime readers love. It also immerses us into a legal system different to the UK/USA/Australian ones, and has us fascinated by a hint of what lies beneath the surface of Norwegians in her main characters; a tough, gruff façade and yet endearing and likeable.