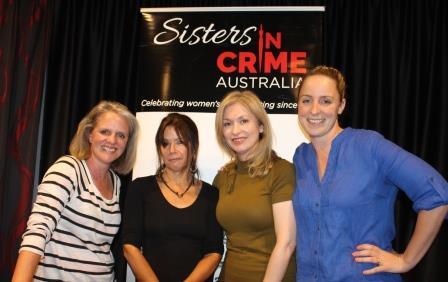 The authors just didn’t dip their toes – they plunged in!!

In the case of Candice Fox’s latest novel, Crimson Lake (Penguin Random House), the action takes place in the steamy, croc-infested wetlands of Crimson Lake in FNQ – a long way from Sydney where Fox and her previous three novels are based. 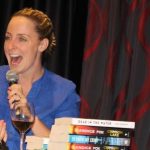 Candice, who travelled down from Sydney had the large crowd in stitches with her trademark humour. Candice says:

There’s nothing more terrifying than wading into murky water and feeling something big and unseen brush against your bare leg. The sensation triggers the primal terror we all try to keep hidden. We’re very aware that water hides predators very effectively, and that’s my bread and butter as a crime writer, descending to those depths and finding the monsters where they hide.

The good news is that Essential Media has optioned Crimson Lake and Candice is busy with a sequel. She also has another book with James Patterson coming out later this year. Never Never, written in collaboration with Patterson in 2016, recently debuted as No.1 on The New York Times best-seller list.

Click here to catch up with Jason Steger’s Saturday Age feature, “Candice Fox: The bestselling writer who has loved crime since she was a girl”:

A lake in Gippsland is the scene of the crime in Tania Chandler’s second novel, Dead in the Water (Scribe Publications) which sees Brigitte, the central character from her debut novel, Please Don’t Leave Me Here¸ undertaking a sea-change with her cop husband Aiden and family. 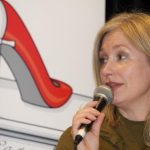 In my latest book, Dead in the Water, my protagonist Brigitte is afraid of the water. Water frightens most of us on some primal level. It’s cold, dark and treacherous. It’s where the bad guys throw their guns and dump the bodies with cement shoes. It’s where Jaws lurks and PI Philip Marlowe finds the decomposing body of the lady in the lake. So I set my novel on Raymond Island in the Gippsland Lakes where, after the last ferry leaves between eleven and midnight, there’s no way on or off the island. The perfect place for a crime story!

Click here to read Robin Elizabeth’s review in the Newtown Review of Books.

To Know My Crime (Harper Collins Australia), Fiona Capp’s debut crime novel, is set on the stretch of coast at Sorrento known as “Millionaires’ Walk”. Fiona said afterwards, “I’ve been to quite a few literary events but none of them were as much fun as the other night.” 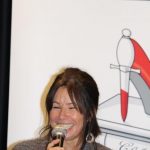 About To Know My Crime, Fiona says:

For those who live on Millionaires Walk, the sea is a symbol of wealth – the priceless views over Port Phillip Bay. But for the two main characters, Ned and Angela, it is a place of mystery, freedom and release that cannot be bought at any price. For Ned, wracked by a growing sense of guilt and betrayal, the ocean is somewhere he can lose himself and for a time, forget his crime. As he watches the out-going tide reveal the rocky reef below, he can’t help feeling that some dark secret is being unveiled. As though the sea is trying to tell him something, if only he could decipher its clues.

Click here to read Jane Sullivan’s feature in the Saturday Age and here to read Louise Swinn’s review in The Weekend Australian Review.