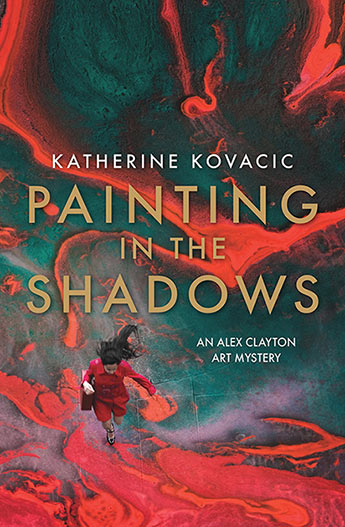 Art dealer Alex Clayton and conservator John Porter are thrilled to be previewing the Melbourne International Museum of Art’s (MIMA) newest exhibition, until they witness a museum worker collapse and badly damage a reportedly cursed painting.

Belief in the curse is strengthened when MIMA’s senior conservator Meredith Buchanan dies less than twenty-four hours later while repairing the work. But Alex and John are convinced there is a decidedly human element at work in the museum.

The evidence sets them on the trail of a mysterious painting that could hold a key to Meredith’s death, and the stakes are raised higher when Alex is offered her dream job at MIMA. Damaging the museum’s reputation will jeopardise her professional future.

The friends soon realise they are facing an adversary far more ruthless than they had anticipated, and there is much more at risk than Alex’s career.

‘Great art can make even the most important person seem insignificant – and I’m not important by any means.’

Art dealer Alex Clayton is both thrilled and nervous to be previewing the Melbourne International Museum of Art (MIMA)’s latest exhibition: Masterpieces of Victorian Britain.  Alex is thrilled because of the art, nervous because she has some unpleasant memories from the time she spent working there.  She and her friend, conservator John Porter, meet and make their way into MIMA.  They are present when, as a large painting is being unpacked, one of the packers collapses and damages the reportedly cursed painting.  The packer is taken to hospital.

Meredith Buchanan, a senior conservator, is to repair the work.  But when she dies, less than twenty-four hours later in an apparent suicide, John Porter is asked to supervise the repairs.  Was Meredith also a victim of the reputed curse?

The conservation studio is now a crime scene, but there is something strange about the scene.  There is a splash of paint: a vivid crimson which is not a colour on the painting to be restored.  And then Alex discovers a torn-up photograph.  The police dismiss the photograph as irrelevant, but something is not right, and Alex and John are determined to investigate.  Their amateur investigations lead them into some tight spots while their knowledge of art leads them to some worrying conclusions.  Alex is offered a job at MIMA, which complicates matters.

This novel is the second in Kovacic’s Alex Clayton Art Mystery series.  We were introduced to the characters of Alex and John in ‘The Portrait of Molly Dean’, and they are further developed here.  They are good friends, have been for years, even though John’s jealous wife does her best to keep them apart.

Kovacic works some interesting technical detail (about the behind the scenes work of art museums and the restoration of damaged paintings) into the story.  But the real focus is on the death of Meredith.  If she did not commit suicide, who killed her and why?  And what is the significance of the crimson paint?

The various pieces come together in a satisfying conclusion.

I enjoyed this novel.  The story and the setting held my attention, as did the working relationship and history between Alex and John.  I especially liked Alex’s Irish wolfhound Hogarth.

I am looking forward to reading the next book in the series shortly.

This second instalment in the amateur sleuthing career of art dealer Alex Clayton is an intriguing and highly enjoyable mystery. Alex and her art conservator best friend—and sidekick in solving crimes—John Porter, are working at the fictitious MIMA (Melbourne International Museum of Art). They are called in after the death of the museum’s chief conservator, Meredith Buchanan, whilst repairing a supposedly cursed painting. Alex and John become suspicious when they piece together a torn up photograph of a red Brett Whitely painting which Alex has never seen before, leading them to attempt to locate the artwork and expose a network of art forgeries ultimately connected to Meredith’s death.

Kovacic’s first Alex Clayton mystery used a parallel storyline structure, jumping from 1999 to the 1930s, as Alex uncovered the circumstances surrounding the death of a woman named Molly Dean over sixty years beforehand. This novel is a departure from that structure since the mystery is set solely in Melbourne at the turn of the new millennium.

Alex’s character is developed in greater depth in this second mystery, as Kovacic reveals fragments of her protagonist’s past. As it turns out, these revelations are not only clever additions to the plot about art forgery, but also add layers and texture to develop Alex into a more realistic—and very likeable—character and sleuth. John plays a well-rounded supporting character too; the Watson to Alex’s Holmes. Even Alex’s giant wolfhound (and housemate) Hogarth is painted as a loveable, albeit minor, character in his own right.

Kovacic’s style is characterised by a wonderful economy of words and use of pared-back language which makes the novel effortlessly enjoyable to read. Painting in the Shadows also displays her capacity to paint little tableaux which deftly balance dialogue with movement and gesture. These little scenes, usually between Alex and John, are punchy, well-crafted and often comical; they also develop their characters in more detail but without seeming contrived. For instance, on their way to the opening of a new exhibition at MIMA, Alex light-heartedly compliments John on his attire for the evening. In response, he ‘… strikes an awkward catalogue pose, one hand on hip, the other with elbow half-bent and finger raised, as though summoning a waiter or hailing a taxi. I shake my head, then make a little shooing motion in the direction of the Museum.’

The first person point of view, paired with Kovacic’s decision to use the present tense, work together to add urgency to the plot and maintain the pace. The story also works well with first person perspective to develop a degree of intimacy between Alex’s thoughts, and the reader. Similarly, Alex’s voice is honed and consistent; the way she brings to mind particular artworks at certain moments in her day is a nice touch. These moments not only demonstrate Kovacic’s knowledge and depth of research around the world of art, but also add authenticity to Alex’s voice and gently offer the reader the option to undertake a bit of additional research in order to full understand the allusion. However, it is more than possible to continue reading without feeling like something crucial has been missed since sufficient detail is carefully supplied without labouring the point. For instance, when John is injured in a hit-and-run, Alex has a moment where she is reminded of Manet’s The Dead Toreador. Even without knowledge of this particular painting, a reader can get enough of a sense of Kovacic’s point to not be distracted from the story.

The setting for the novel, Melbourne in 2001, is authentically woven into the text using a good level of detail without being distracting for those who are not familiar with the city. The details are often added as colour in the form of street and suburb names when Alex is driving somewhere. The weather is also used as a mirror for the action of the plot. The scenes which make up the climax and reveal are skilfully painted in the museum against a backdrop of a violent, drenching—but ultimately cleansing—summer rainstorm breaking over the city after a heat wave. This crafts a clever parallel to the final scenes and conclusion of the story.