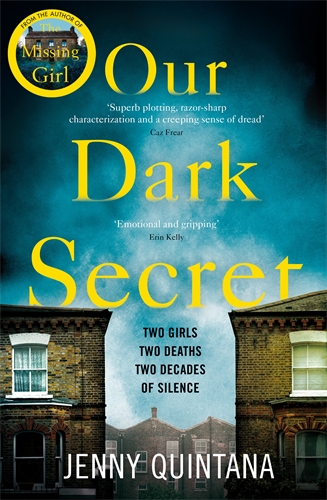 The crazy girls, they called them – or at least, Elizabeth liked to think they did. As a teenager in the late 1970s, she was clever, overweight and a perfect victim for the bullies. Then Rachel and her family arrived in town and, for Elizabeth, it was as if a light had been switched on. She was drawn to the bright and beautiful Rachel like a moth to a flame.

Rachel had her own reasons for wanting Elizabeth as a friend and, although their relationship was far from equal, Elizabeth would do anything for Rachel.

Then the first body was discovered.

Twenty years on, Elizabeth wants nothing more than to keep the secrets of her teenage years where they belong: in the past. But another body has been found, and she can’t keep running from what happened.

Although I found the initial time jumps rather off-putting, it wasn’t long before the mystery drew me in and made me start guessing – not only the usual “who was the killer” guessing, or the why or the how, but who was the body. Right from the start we know a skeleton has been discovered and that Elizabeth Valentine feels in some way responsible, but the final revelation is like Hansel and Gretel’s breadcrumb trail – we have to pick up each little morsel in order to follow where the author wants us to go. And in the end we have to ask ourselves if we picked up enough clues, or if we simply didn’t see what we should have.

Elizabeth’s world is beautifully depicted, not because the scenery is beautiful, but because of the words chosen bring to life an English village in the 1960s and 1970s and the, at times, uncomfortable relatability of the early teenage years of an awkward, overweight girl trying desperately to fit in. Although devoted to her father, she realises that the unhappiness in her parents’ marriage stems from his infidelity, which leads to him leaving and throwing Elizabeth’s life into turmoil.

The reader travels Elizabeth’s story with her, feeling her obsessive desire to become friends with Rachel, the cool, beautiful girl who appears to have what Elizabeth badly wants. Rachel’s family’s lives start to entwine with Elizabeth’s but this only leads to upheaval and unhappiness for all. Eventually, the two girls develop a friendship of sorts, with Elizabeth, devoted and needy, finally discovering that Rachel is hiding a horrific secret that leads to both girls becoming involved in one of the killings.

Elizabeth is an unlikely heroine, and one that, at first, I thought I would grow tired of, but this wasn’t the case. Clever, but naïve in a lot of ways, she showed inner strength when it was called for, and matured quickly in the face of adversity.

Although this is a crime novel, and there are several crimes, it didn’t feel like what I would normally consider a crime novel to be, but rather a look into what makes us who we are and how our choices can drastically change the lives of others.