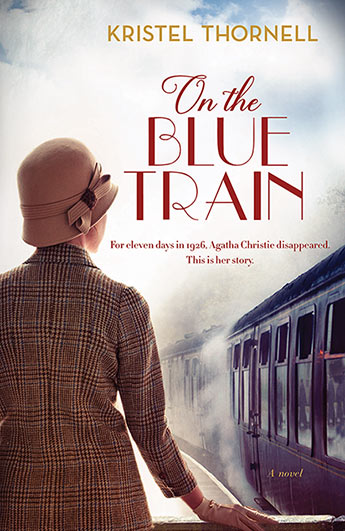 It was the work of a moment: On 4 December 1926, Agatha Christie became Teresa Neele, resident of the spa hotel, the Harrogate Hydro. With her wedding ring left behind, and her minimal belongings unpacked, the lost days begin.

Lying to her fellow guests about the death of a husband and child, Teresa settles in to the anonymity she so fiercely desires. Until Harry McKenna, bruised from the end of his own marriage, asks her to dance.

This novel combines fact and fantasy to reconstruct Agatha Christie’s retreat from a life that had become too difficult.

This book is an imagining of how Agatha Christie spent her time while missing in 1926.  The newspapers of the time covered the searches for the missing author, accompanied by her photo, stated that her abandoned car had been found, speculated as to what had happened.

Agatha was found, although she had signed into the hotel under a different name, which included the surname of her husband’s lover.

The book follows the events of the historical record, using the name of the hotel, the place the car was found, the name Agatha used.

A story is woven around the facts, which explores a possible deliberate path taken by Agatha to get a breather within the torment of her husband’s philandering.

I enjoyed the way that the book allowed her to develop relationships with people staying at the hotel because they took her for the persona she had created. The slow revelation of more pieces of the puzzle, of the reason for her disappearance, and the reason for the presence of others at the hotel was gentle. Mostly I felt the pacing of the revelations in the book was good for the story, and the choice of activities appropriate for the kind of relief being sought by a person who had reason to hide from their everyday life.

The story included themes that provoked thought: the damage done to men mentally by war; the consequence of a child dying; the difficulty for a woman who has a philandering husband; the effect of guilt on future relationships.

The filling in of a possible scenario for the life of Agatha while at the hotel was covered in an interesting manner, and I enjoyed the read.