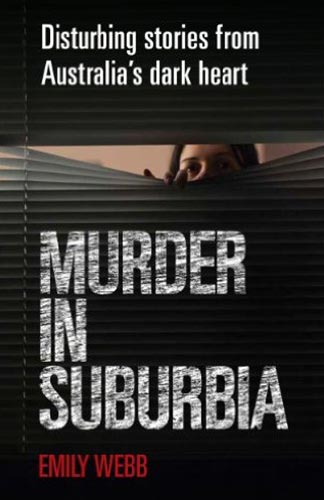 Author: Katherine Howell
Publisher: Pan MacMillan
Copyright Year: 2014
Review By: Ruth Wykes
Book Synopsis: In Murder in Suburbia true-crime author Emily Webb has investigated a number of cases that most people won’t have heard about. Emily Webb has tackled some of the most bizarre crimes in Australia, those that leave investigators scratching their heads. As the title suggests, most of these crimes were committed in people’s homes. Most of the victims were what police would call “low risk”.

Many of the stories are contemporary, although Emily has included a number of historical crimes –going all the way back to 1914. I found it quirky that the publisher chose to use darker paper and a different font for the older crimes. I liked the effect, I hadn’t seen it used before.

The are some disturbing cases in Murder in Suburbia. They include the murder of an elderly Adelaide woman, whose killer dismembered her in her own home and wheeled her away in a pram. Why? Because the young woman who murdered her had developed an elaborate plan to steal her home and assets. Another disturbing case was the Sydney taxi driver; a woman who was about to retire and move to the coast. She never made it.

Emily Webb has used her journalistic skills and resources to dig deep for the stories that appear in Murder in Suburbia. The stories are told in a measured, compassionate tone –and in those places where the author has been unable to find a motive, I suspect it’s because some crimes never make sense to anyone.

If you’re interested in Australian true crime I recommend Murder in Suburbia. Some stories will leave you shaking your head, some will make you sad, but it’s an interesting and compelling read.