Sisters in Crime Australia has presented its first Lifetime Membership Awards –  to Vivienne Colmer and Robin Bowles on 13 March and to Phyllis King on 17 April.

Here’s an abridged version of what National Co-convenor, Carmel Shute, said when making the presentations: 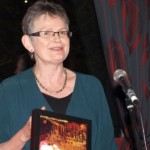 “The first recipient is Vivienne Colmer who served as a National Convenor from 1999-2011. Vivienne brought her superb organising skills from the union movement to Sisters in Crime. She was the key organiser for SheKilda, Sisters in Crime’s 10thanniversary convention, held at St Kilda Town Hall in 2001.

“She secured out international guest of honour, Tart Noir Queen, Lauren Henderson though it was touch and go for a bit. Lauren was living in New York where the Town Towers were bombed shortly before the convention. Then there was the Qantas strike. Vivienne coped with all these challenges with her usual cool head and great strategic sense. SheKilda was a triumph, despite being organised in record time.” 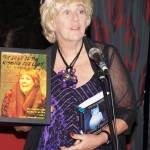 “Our second Lifetime Membership goes to true crime author Robin Bowles who served as a National Co-convenor from 2001-2010. Besides bringing her inimitable sense of style to Sisters in Crime, Robin was a gun event organiser and sponsorship queen. I worked with Robin in negotiating what turned out to be 4 years of sponsorship with the Victoria Police Museum for the Davitt Awards.

“To see her get the deal was awe-inspiring. I can’t remember if she played good cop and I played bad cop but whatever it was, it was extremely successful! Robin was always full of ideas for events and she’s sorely missed on that front.” 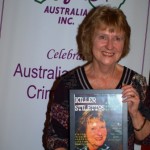 “The third recipient is Phyllis who served as a national co-convenor from 2002 to 2014. Her family name is King but to us she is a Queen of Crime.

“In Sisters in Crime, we often mistrust the supernatural – or the oomby goombie’ as former convenor Cathy Martin likes to call it – but it’s true that Phyllis appeared as if by a divine miracle when we were in a huge tizz organising SheKilda 2001. Phyllis King and her daughter Tanya King (as she then was) turned up at St Kilda Town Hall as volunteers on the Thursday night before the grand opening the Friday night.

“In Sisters in Crime, we are nothing if not opportunists – we know talent of the criminal kind when we see it and we quickly snaffled them both as national co-convenors straight after SheKilda. Phyllis brought the wonderful organisational skills that she exercised at the University of Melbourne Business School to Sisters in Crime – particularly, the organisation of the Scarlet Stiletto Awards and the Davitt Awards.

“It was a lot of slog but not without its own rewards. We know that Phyllis loved being able to ring up the authors shortlisted for the Scarlet Stiletto Awards and hear their delight at the news. Supporting emerging writers is one of Sisters in crime’s missions.

“Phyllis brought a lot of intellectual rigour to the reviews she wrote for or magazine and more latterly the Sisters in Crime website and to the judging process. We’re thrilled that she – and Tanya as well – will continue to be judges for the Scarlet Stiletto Award competition.” 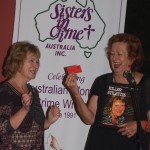 A fourth Lifetime Membership Award will be presented to Cathy Martin on 15 May.