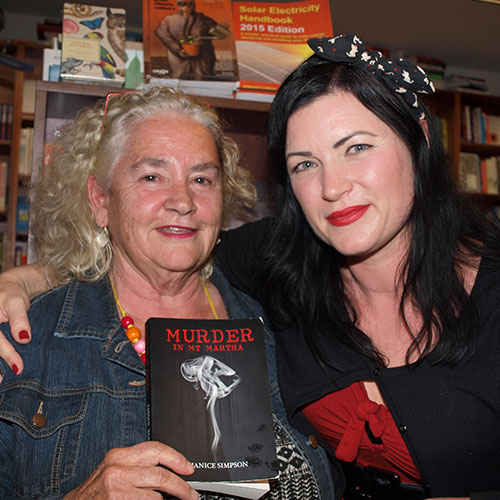 An enthusiastic crowd turned up at Readings Carlton on 6 April to usher Janice Simpson’s debut novel, Murder in Mt Martha, into the world.

Steeped in Melbourne’s past and historically accurate, Murder in Mt Martha is inspired by a real-life unsolved murder. 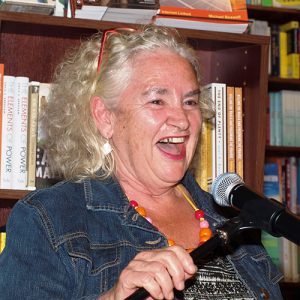 Janice Simpson is a Melbourne based writer with a background in university teaching and educational publishing. Her books include a travel memoir Let Sleeping Dogs Lie (2012) about her bicycle trip from Paris to Istanbul, and All the Good Ones Aren’t Taken about the singles industry (1997). Janice teaches at RMIT, is a national co-convenor of Sisters in Crime, and is completing her PhD in creative writing.

Leigh Redhead, author of the award winning Simone Kirsch private eye series and a long-time Sisters in Crime member, officially launched the book. Here’s what she had to say.

Hi everyone and welcome to the launch of Janice Simpson’s debut crime novel, Murder in Mount Martha. I’ve known Janice through her work as a national co-convener for Sisters in Crime. She’s done so much to support women’s crime writing so I’m delighted to be able to return the favour.

I love book launches more than any other party or event – and I think it’s because I know just how much effort goes into writing a novel. Years of slaving over a hot laptop combined with the intense mental and emotional energy needed to create a whole world populated with living, breathing characters. Having one of these things published is the ultimate exercise in delayed gratification, and we all know how difficult delaying gratification is.

When I first heard the title of the book, I thought it had a bit of an Agatha Christie kind of ring to it, a sort of Murder at the Vicarage, with Miss Marple nosing about; however nothing could be further from the truth. Murder in Mount Martha has more in common with noir fiction than cozy mysteries, and is right up there with the best of contemporary Australian crime fiction.

The novel is based on a real life case from the fifties – the unsolved murder of a fourteen-year-old girl who was brutally beaten to death. The story weaves together the past and the present, and the point of view switches from that of the murderer and his family, to young academic Nick Szabo. Nick stumbles across the unsolved case while he’s researching a PhD based on his Hungarian grandfather’s defection to Australia during the 1956 Olympics.  I know a few people here doing a PhD, including myself, and I can’t tell you how often we’re stumbling across cold cases – it’s an occupational hazard!

Nick teams up with an older man, Arthur Boyle, who has a wealth of information about Melbourne in the fifties, and together they investigate who was responsible for the girl’s horrible death.

I’ve always loved a past/present narrative, and Janice does hers brilliantly, bringing contemporary and 1950’s Melbourne to life as the action ranges from the Melbourne CBD, to Fitzroy and Carlton, all the way up to a pub come brothel in far North Queensland.

Murder in Mt Martha is not only a crime thriller, but a historical novel, and a social study. It’s obvious that Janice has done an amazing amount of research – but it’s the good kind that blends seamlessly with the story, not the sort that shouts ‘hey everyone – look how much research I’ve done!’

The interweaving of the past and present really keeps you on the edge of your seat. Will Nick and Arthur be able to put together the clues of the past to identify the killer? Will the police catch up with him while he’s still alive?

The novel is multilayered. It’s about family secrets, and how the past always affects the present. It’s about corruption, taking responsibility, forgiveness and how some things can never be forgiven.  The characters in the book are diverse – they are varying ages, living in different eras, some born in Australia and others overseas. Janice has a real talent for bringing the past to life, making her characters from the fifties seem real, rather than sepia toned images from a newsreel.

One of my favourite things about the book was the way Janice gets inside the murderer’s head. As in the best psychological thrillers, she fleshes out the antagonist so he’s not just a cardboard cut-out villain. The scenes from the killer’s point of view were reminiscent of novels such as Jim Thompson’s The Killer Inside me – and had a real noir sensibility.

Murder in Mt Martha has something for everyone: history, culture, violence, and secrets and lies all wrapped up in a seamless and evocative prose that brings the past to life. Another thing it has is a lot of food. I defy you to read the gorgeous scenes between Nick and his grandmother without salivating over descriptions of her cooking! So please everybody join me in raising a glass, as I now declare Murder in Mount Martha officially launched.