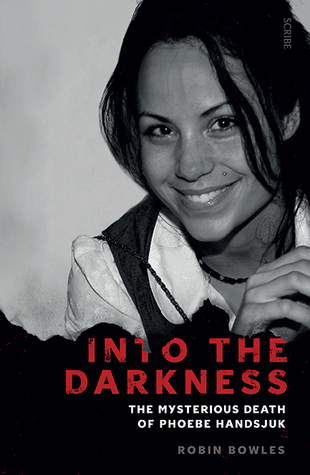 On 2 December 2010, the body of 24-year-Pheobe Handsjuk is found at the bottom of the rubbish chute in the luxury Balencea apartments, in St Kilda Road, Melbourne, where she lived with her boyfriend, Antony Hampel. It emerges that Phoebe was a beautiful, damaged young woman embroiled in a fraught relationship with a well-connected lover almost twice her age. The police investigation into her death is woefully inadequate. Phoebe’s grandfather, a former detective, decides to make some enquiries of his own. After a 14-day inquest, in 2014, the Coroner delivers a baffling finding that excludes both suicide and foul play.

In a compelling exploration of a bizarre case, True-Crime writer Robin Bowles probes the circumstances behind the death of Phoebe Handsjuk, a troubled young woman who bled to death after falling down a forty-metre garbage chute in her apartment building. Through interviews with Phoebe’s family and friends, Bowles builds a portrait of a complex, well-meaning but impulsive character, describing a girl that has always ‘marched to the beat of her own drum’. Phoebe has history of depression and drug use, and, even as a school girl, became infatuated with older men.

At the time of her death, on the second of December 2010, 24-year-old Phoebe, lived in the upmarket Balencea building with her on-again off-again boyfriend, 43-year-old Antony Hampel.  Bowles’s examination of this pivotal relationship is both intriguing and restricted. Hampered by the coterie of minders that have surrounded the wealthy events-manager since Phoebe’s death, and kept at bay by his prominent legal family (both Hampel’s parents are judges) she extracts a version of the night’s events that paint Antony as the indulgent, long-sufferingly patient older-man, dealing with a self-destructive younger woman. Phoebe’s circle tell a significantly different story, one based, in part, on her own account of a relationship that was increasingly controlling and eroding to her self- esteem. A union that she once told her mother she might need to escape from, no questions asked. What is agreed on by all parties is that Phoebe had a burgeoning alcohol addiction and under its effects became erratic and unpredictable.

Cataloguing the long list of uncollected and disregarded crime scene evidence, Bowles reveals that the subsequent police investigation into the death was minimal, and breathtaking in the scope of its omissions and indifference to the available facts. As one of the last people to see Phoebe alive, Antony Hampel’s version of what happened in the final days of her life constitutes the accepted time line of events.
Disturbed by this lack of real enquiry into his granddaughter’s death Lorne Campbell, a retired detective, undertakes his own collection of evidence for a submission to the Coroner.

Based on the available, conflicting accounts the author explores three possible scenarios regarding the ‘how’ of Phoebe’s death; either an intoxicated Phoebe intentionally took her life by climbing into the narrow garbage-chute, or on some ill-founded whim she climbed in it and accidently died, or someone had fed her, feet first, into the chute while she was incapacitated. The ‘why,’ regarding how a smart young woman found herself in any of these predicaments, is more fully drawn throughout the book via the compassionate and honest study of Phoebe’s personal struggles for identity and direction, and her destructive escapism through alcohol and drugs. Whatever took place that fateful night, the reader is left with the impression that she had become overwhelmed by the confines and dependency of her relationship with Hampel and was on the verge of crisis or change.

The long section of Bowles’s reportage of the protracted, often repetitive, evidence given at the 2014 Inquest is less engaging and is marred by jarring personal asides that take the reader out of events. The Coroner’s ultimate finding raises many more questions than it answers and leaves the reader with a lasting sense of frustration. Many days after finishing the book I found myself thinking about Into the Darkness, puzzling over the course of events that led to the death of a vulnerable girl.