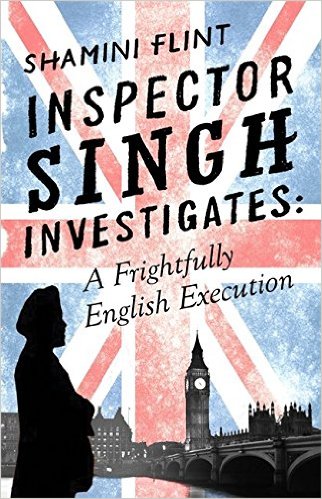 Inspector Singh is irate.  He’s been instructed to attend a Commonwealth conference on policing in London: a job for paper-pushers, not real cops, as far as he is concerned.

And, as if that isn’t bad enough, his wife is determined to come along to shop for souvenirs and visit previously unknown relatives.

But it isn’t long before the cold case that lands on Singh’s ample lap turns into a hot potato and he has to outwit Scotland Yard, his wife and London’s finest criminals to prevent more frightful executions from occurring on his watch – or indeed, from being added to their number.

This is the seventh book in the ‘Inspector Singh Investigates’ series and although we’ve had to wait a while to catch up again with Inspector Singh, he does not disappoint.

His greatest fear, when he advised his wife (always referred to as Mrs Singh even by Mr Singh) that he was being sent to London for a conference, was that Mrs Singh would decide to accompany him.  His fear was justified, as Mrs Singh wanted to shop for souvenirs and visit unknown relatives in London.  Mrs Singh is out to impress the relatives by her investigative skills and in doing so causes her husband great grief mainly due to her inability to keep quiet, even when her life is threatened by a terrorist determined to make a point by removing her head.  In this seventh investigation, Mrs Singh is very much a central figure.

Inspector Singh’s task in London is to ascertain whether or not a better relationship between the police and the multicultural community would have led to a better outcome in previous police investigations.  The investigation assigned to him is a cold case of a young Muslim woman who was murdered 5 years previously. Her hands had been removed, throwing suspicion on family members as they had arranged a marriage, which she refused to accept.  Her Pakistani fiancé raced to London when he suspected that she would not go through with the wedding – so he is also a suspect.  Singh can’t understand why they just don’t arrest the murderer, as he would have done in Singapore.  Things become more complicated when another young female is murdered and as with the young Muslim woman, her hands are also cut off and taken by the murderer, possibly as a souvenir.  Singh is adamant that the two murders are not connected but he is on his own with this thought and the Met detectives investigate both as the work of a serial murderer, causing panic when the details are leaked to the media.  When a third such body is found, Singh really is out on his own with his theory that they are not connected.

This London based Inspector Singh touches on many of the issues facing modern policing around the world today, murder within minority groups and whether or not police have the cultural sensitivity to investigate such crimes to a successful conclusion.  There is also home-grown terrorism, money laundering and the connection between the two.

Shamini Flint always sets her Inspector Singh books against the back- drop of reality within the geographical setting of the book.   Due to our exposure to the recent events in the UK, none of these issues will surprise the reader but what is frightening is the ordinariness of the people responsible for these shocking crimes, an issue highlighted in this book.

A great read from one of our favourite authors.