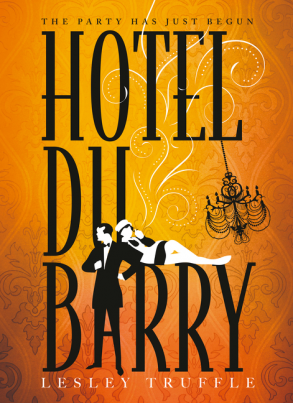 When a laughing baby is found amongst the Hotel du Barry’s billowing sheets, tucked up in an expensive pair of ladies’ bloomers and neatly pegged to the laundry line, the hotel staff resolve to keep the child. The hotel’s owner, Daniel du Barry, still mourning the loss of his lover in an automobile accident, adopts the little girl, names her after his favourite champagne and seeks consolation in fatherhood. Cat du Barry grows up beloved by both hotel staff and guests, equally at home in the ninth-floor premium suite as she is in the labyrinth below stairs.
Years later when Daniel du Barry dies in sinister circumstances, Cat determines to solve the mystery with the assistance of her extended hotel family.

A tour de force by this vibrant wordsmith packed with moments both poignant and hilarious but never less than extravagantly brilliant. Nothing is humdrum or prosaic in this novel. Every character and event is drawn in hyperbole: the settings are grandiloquent or sordid beyond compare, the women are more beautiful than would be humanly possible for more than a fleeting moment, the men more handsome and, above all, more virile, or hopeless. Love is extreme, hatreds more so. Together the cast list romp and rage for several hundred pages from the time a baby is found pinned to a clothesline inside an outsize pair of ladies bloomers, outside the Hotel du Barry, through her upbringing by a hotel baron with decidedly gay tastes and a faithful housemaid, his deathless love for a man long dead, and his loveless marriage to the lover’s twin, his wife’s scheming and final downfall, and the resistance of the magnificent gigolo, Sean, and his true love the voluptuous, kind, and good Mary Maguire (there is more than a touch of the blarney in these characters).

Everything along the way in a gilded Europe that exists on money and excess is bigger, better, and brighter than in the humdrum world we inhabit as we watch the baby heroine, Cat, named after an exotic brand of champagne, grows into sensible and gallant womanhood, her talent as an artist, and courage and tenacity as she seeks her real birth mother. There is wisdom as well as wit in the story with every character larger than life and twice as vital. As if to embody the sense of the heightened reality and, in places the totally unreality of it all, Jim Blade the good house detective says when recovering in hospital from a dastardly attack, ‘If you want some peace and a place to so some serious thinking, then hospital is the place to be (p.341). Really? Move over Jim. What hospital is this? But then we are back to the colour and splendour of the magnificent Hotel du Barry, a pick me up for any convalescent or anyone ready for an exhilarating fantastical trip into a world of glamour, intrigue, true love, and treachery. A great fun read.