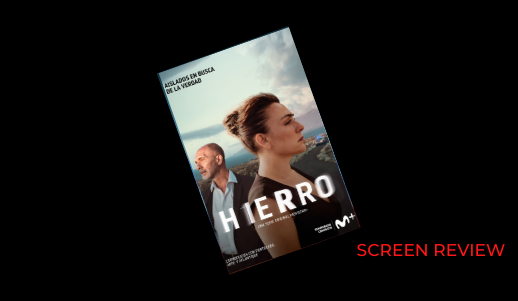 Streaming on SBS On Demand are two series of Hierro, an award-winning Spanish/French mystery set on El Hierro, a volcanic island in the Canary Islands. It is a bleak land of black soil surrounded by stunning coast dramatically captured by cinematographer Jose Luis Bernal. El Hierro is just south and smaller than La Palma, currently experiencing devastating lava flows.

Candela Pena plays Candela Montez, an investigating magistrate posted to the island as punishment for troublemaking on the mainland. She is also a single mother of Nico who has cerebral palsy. She is not happy with the transfer. Her determination not to be compromised by the locals or their customs is reflected in her unsuitable choice of shoes and wheelie bag.

Dario Grandinetti plays Diaz, a banana plantation owner with a criminal history and links to the drug trade. When his daughter’s fiancé is killed, he is the main suspect.

Candela and Diaz work from different angles to find the killer, Candela doing her job against local reluctance and Diaz using his criminal contacts to clear his name. Candela treads a fine line to avoid being influenced or compromised by Diaz. The interplay between them is nuanced. Strong writing and great acting combine to avoid cliché.

Candela’s principles are also tested by the relationships between the people on the small island. Everyone knows, or is related to, the victim or a suspect or both, including the young woman who assists her in caring for her son Nico.

Nico is played by the beautifully named Angel Casanova. It is rare to see a child with a severe disability on-screen and rarer still to see the child portrayed as a three-dimensional character. The cinematographer captures his smiles and disappointments. Over the two series Nico’s health declines. I felt Candela’s heartbreak and the anguish caused by being on an island so far from medical care.

The series is created by Pepe and Jorge Coira. Pepe Coira is also the screenwriter together with Fran Araujo, Araceli Gonda, Coral Cruz, and Carlos Portela – all nominated for a screenwriting award for this series.

I can see why this series won so many awards. The characters are real in a setting that feels like a moonscape.